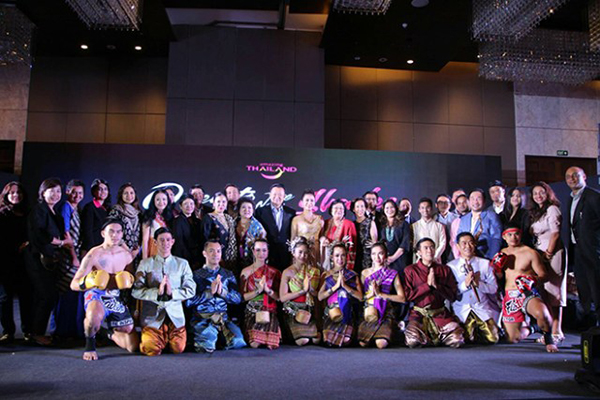 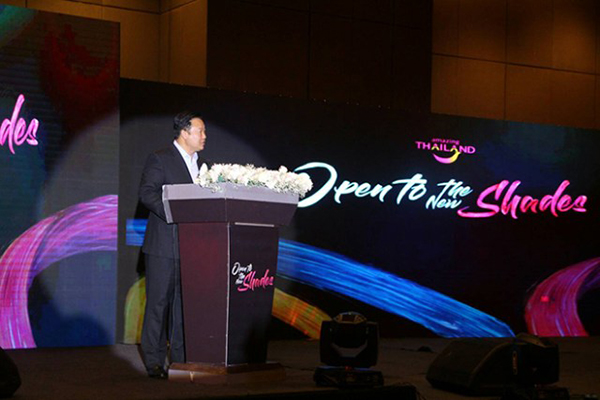 Mr. Yuthasak Supasorn (above picture), the TAT Governor, headed the Thai tourism team at the launch event held in New Delhi. It was attended by several senior executives from Indian travel companies, travel media and invited guests from the business community. 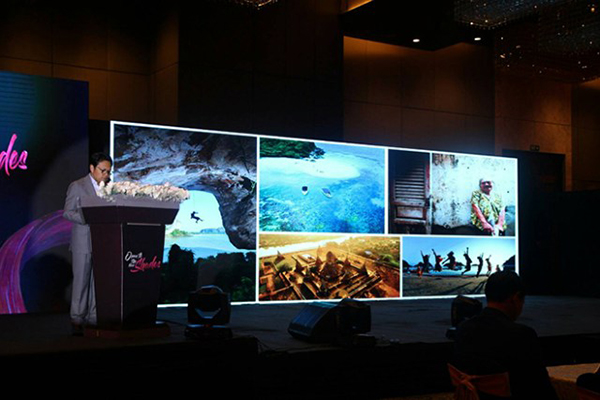 In his product presentation, Mr. Tanes Petsuwan (above picture), TAT Deputy Governor for Marketing Communication said, “The Open to the New Shades concept is about asking visitors to “open” their minds and hearts to deepen and widen their experiences into a new perception of attractions and variety of experiences in Thailand.
“The communication campaign will introduce brand-new products to visitors, or reveal a new charming character of well-known destinations through creativity. This campaign is aimed at attracting more repeat visitors and also first-time visitors. Visitors can discover new perspectives in existing attractions, or indulge in experiences in new tourist attractions.
Mr. Tanes outlined the broad variety of tourism products that Indian visitors will enjoy in the categories of Gastronomy, Nature and Beach, Art and Craft, and Thai Culture and Way of Life. 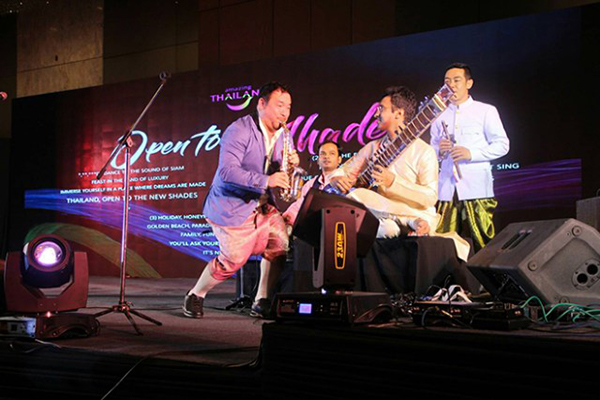 Indian guests also enjoyed a live music performance by special guests, Mr. Koh Saxman (above picture), a famous Thai saxophonist featuring with the Indian musicians including Mr. Dhruv Bed (sitarist) and Mr.Manassas Jena, (tablaist). Well-known Indian journalist Mr. Vir Sanghvi, a regular visitor to Thailand and a lover of Thai food, also spoke about his fondness for the kingdom and narrated some of his experiences over the years.
Guests also witnessed a demonstration of Thai culture such as the coloring a Khon Mask, painting Thai pattern on the hand, fruit & vegetable carving and stage performances (Muay Thai and Thai Classical Dance).
TAT offices in Mumbai and New Delhi are working with partners and tour operators to convert the new marketing concept into substantial sales targeted at specific customer segments; such as, Luxury Travel, Weddings and Honeymooners, and Female Travellers, and Families.  Also targeted are university students and newly working women.
TAT is also targetting a new wave of visitors from secondary cities in India. Given the large number of Indian cities with a population base of more than three million people, India is seen as being a major source of visitors for Thailand in the years ahead.
Mr. Yuthasak said, “India is now one of our top ten sources of visitor arrivals, a member of a small club of countries that generate more than one million visitors a year. In 2017, Thailand recorded 1.41 million visitor arrivals from India, up by 18% over 2016, generating an estimated 120 billion Rupees (62.40 billion baht) in tourism income. We are targeting a revenue growth of 12% for Indian market in 2018.
He said more and more Indian travellers are diversifying beyond their traditional spots of Bangkok and Pattaya, and exploring Chiang Rai, Rayong, Trat, Hua Hin and Samut Songkram.
In 2018, bilateral business and MICE travel is expected to increase as India’s economy grows and new airlines launch more bilateral flights. The completion of the Asian Highway road linkage through Myanmar will allow a whole new generation of travellers to open up new corridors of travel between South and Southeast Asia, Mr. Yuthasak said.
At the end of event, Mr. Yuthasak presented 10 awards to supporting partners, consisting of travel agents, airlines, media, and wedding planners.
Between 30 March – 2 April 2018, TAT will organise a mega-famtrip for a carefully chosen list of 100 Indian tour operators and 50 media.
Indians can receive visa-on-arrival facilities at Thailand’s international checkpoints. Bilateral airline capacity is at an all-time high with 240 weekly flights between Thailand and 17 major cities in India by 11 airlines: Thai Airways, Bangkok Airways, Air India, Jet Airways, Indigo Airlines, Spice Jet, Thai Air Asia, Bhutan Airlines, Druk Air, Garuda Indonesia and Thai Smile.

A New Level of Excitement and Racing Experience

flydubai spreads its wings to Chennai

The Sky Lounge Bar and Gril- the...