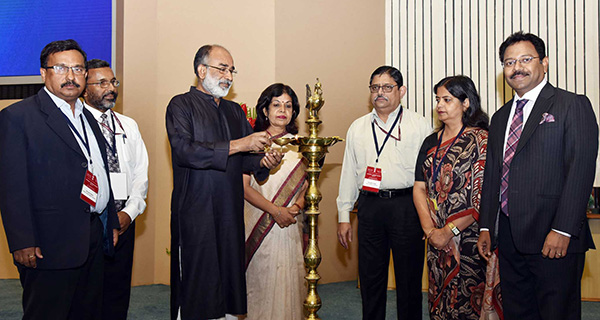 The Minister of State for Tourism (I/C), Mr. Alphons Kannanthanam lighting the lamp at the presentation of the National Tourism Awards (2016-17), on the occasion of World Tourism Day, organised by the Ministry of Tourism The other dignitaries and tourism officials are also seen.

TravelMail BreakingNews ( #www.travelmail.in ) #TravelNews #TourismNews #DailyNews
[dropcap]N[/dropcap]ew Delhi: The Union Minister for Tourism (IC), Mr. K.J. Alphons said that India has taken great strides forward in the field of tourism during the last four years of the Government and added that tourism, today, is the cornerstone of the Indian economy, as it is a major source of employment and foreign exchange, and in order to tap the full potential of this sector, industry has to join hands. 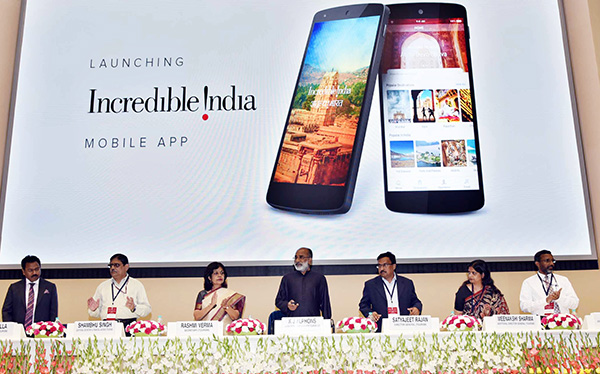 The Tourism Minister presented the National Tourism Awards 2016-17 on the World Tourism Day, in New Delhi, today. The Minister also launched the ‘Incredible India Mobile App’ and the “Incredible India Tourist Facilitators Certification” programme. Congratulating the awardees, Shri K. J. Alphons also shared the concern that the tourism sector needs to improve its hospitality services since it is the hospitality offered which is the distinguishing feature of India and gives it an edge over other countries.  He also added that it is the responsibility of every citizen to build the image of the country as safe for anyone to travel.
The Minister also announced that, India will be the host country for official World Tourism Day celebrations for the UNWTO, in 2019. The theme for the World Tourism Day 2018 being “Tourism & Digital Transformation”, the Minister recounted the various digital initiatives taken by the Ministry in harnessing technology for tourism promotion, which include, launch of a new Incredible India website; 24 X7 Chat bot interface on this website; launch of a new website on Buddhism in India and many more initiatives.
The Minister also said that the Ministry of Tourism has formulated a voluntary scheme for Approval of Operational Motels, with effect from 25th September 2018 with an aim of recognizing the Motel segment as a component of the overall tourism product, and set standards of facilities and services of Motels.
Shri K J Alphons also informed the industry that the flood-stricken Kerala is now ready to receive tourists since the hotels and tourist sites are now operational. He also added that the state is rapidly recovering from the disaster and it is now the time for the tourism industry to support the state’s tourism sector.
Delivering the welcome address, the Union Tourism Secretary, Smt. Rashmi Verma said that in the last four years, India has aggressively implemented its promotion strategies in branding, advertising, and selling of its tourism potentials. Smt. Rashmi Verma also added that the Ministry in tune with the changing times, has brought in new initiatives like the Adopt a Heritage scheme wherein collaboration with corporate, schools and other stakeholders was initiated to improve facilities at monuments, initiation of 12 iconic sites, MoUs for bilateral tourism with countries, first ever India Tourism Mart and the International Buddhist Conclave 2018. The Secretary also congratulated the industry stakeholders without whose partnership the achievements in the Tourism sector in the last few years, would not have been possible.
The Ministry of Tourism annually presents National Tourism Awards to various segments of the travel, tourism and hospitality industry. These awards are being given since the early 1990s and are presented to State Governments / Union Territories, classified hotels, heritage hotels, approved travel agents, tour operators and tourist transport operators, individuals and other private organizations, in recognition of their performance in their respective fields, and also to encourage healthy competition with an aim to promote tourism.
The National Tourism Awards have over the years emerged as a prestigious recognition of achievements in the travel, tourism and hospitality sectors. This year, a total of 77 awards were presented to the tourism industry stakeholders, State Governments, central agencies and individuals.
The Certification programme launched today, is the only one-of-its-kind of online learning, aims to brand the country in a positive light, through these facilitators, by building capacity of the key touch points for tourists, desiring that each interaction result in superior experience for the visitors.   This online learning platform has been developed by Wipro Limited.
The Incredible India Mobile App, showcases India as a holistic destination, revolving around major experiences, such as spirituality, heritage, adventure, culture, yoga, wellness and more. The mobile app has been designed keeping in mind the preferences of the modern traveler and follows the trends and technologies of international standards. The app has been equipped with features to assist the traveller in each phase of their journey to India. The app has been developed by Tech Mahindra.