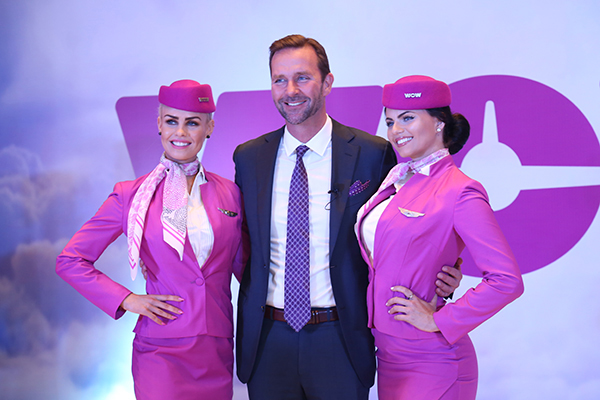 #TravelMail ( #www.travelmail.in ) #TravelNews #TourismNews #DailyNews #BreakingNews
[dropcap]N[/dropcap]ew Delhi: WOW air, Iceland’s low fare transatlantic airline, announces the launch of its flight operations in India from December 7, 2018 with incredibly low airfares that will enable everyone to fly. The airline will have five direct flights a week between New Delhi and Keflavik airport in Iceland that will connect to multiple destinations in North America and Europe.
To be offered in 4 exciting fare options:  WOW basic, WOW plus, WOW comfy & WOW premium, the airline will introduce never-before seen fares to their transatlantic destinations for Indian travellers. A one-way ticket to Iceland, US, Canada and London in economy category called WOW basic will start from INR 13,499/- (including taxes) while the business class fares termed as WOW premium will be priced from INR 46,599/- onwards (including taxes). With some of the most competitive international fares, WOW air brings in the best flying option to North America including cities like New York, Los Angeles, San Francisco, Chicago, Baltimore and many more destinations. The airline also gives a spectacular, cost-effective opportunity to break-up long-haul journeys across the Atlantic and simultaneously enjoy some breathtaking scenic destinations or outdoor adventures in Iceland.
WOW air will be the second European airline in the world to deploy the most modern long-haul aircraft, Airbus A330neo for the route from New Delhi.
Announcing the launch of its India operations, Skúli Mogensen, Chief Executive Officer and founder of WOW air said, “We are thrilled to launch our operations in India, a diverse country with tremendous potential. Our launch is in sync with India’s aviation growth story and we look forward to being part of it with our very affordable fares to North America and Europe on board brand new Airbus A330neos. It is also a major milestone for WOW air as we are now connecting Asia with our extensive network in North America and Europe, making Iceland a global hub. WOW air also plans to add more flights to India in the future as the country strongly moves ahead to become the world’s third largest tourism economy in the next ten years.”
WOW air looks forward to welcoming its guests on board from December 7 onward this year subject to final completion of regulatory formalities.