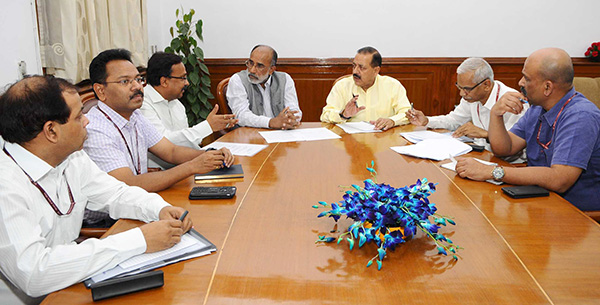 #TravelMail ( #www.travelmail.in ) #TravelNews #TourismNews #DailyNews #BreakingNews
[dropcap]N[/dropcap]ew Delhi: The Union Minister of State (IC) of the Ministry of Development of North Eastern Region (DoNER), MoS PMO, Personnel, Public Grievances & Pensions, Atomic Energy and Space, Dr. Jitendra Singh held a meeting with the Union Minister of state for Tourism (I/C) and Electronics and Information Technology Shri K.J. Alphons. During the meeting, they discussed proposals for identifying new projects on priority for development of tourism in the North Eastern states. The meeting is part of continuing inter-ministerial discussions for development of North Eastern states.
After the meeting, Dr. Jitendra Singh said that the Ministry of DoNER has recommended to the Finance Ministry for higher fund allocation and special package for such projects in the NE region. The Minister said under the ‘North East Special Infrastructure Scheme (NESIDS), the DoNER Ministry is providing financial assistance for projects of physical infrastructure relating to water supply, power, connectivity for promoting tourism in the region.  He said that this will be over and above the existing schemes of the Central and State governments of the NE region. Dr. Jitendra Singh said that under the North Eastern Council (NEC), work is underway for promotion of theme-based regional tourism circuits.
Pointing out some new initiatives under Ministry of DoNER funded works, Dr. Jitendra Singh said that amenities have been created at Nathu La in Sikkim for acclimatisation of pilgrims undertaking Mansarover Yatra through this route.  He added that such tourist facilities are being developed at the popular tourist hub Majuli island in Assam.  He said, improved connectivity has already seen growth in tourism in the NE region, which has immense potential to generate employment.
The Tourism Minister Shri Alphons said, development of tourism and identifying new tourist hubs in the NE region is a  priority for his ministry and added that funds will be made available for this task. He said that North East region has great locations which could be ideal as film shooting destinations. He further said that the region could be great attraction for tourists from South East Asian countries. The Ministry of Tourism will provide support for boosting tourism avenues in the North East region, he added.
Secretary, Ministry of DoNER, Shri Naveen Verma and other senior officials of both ministries were also present.

Tourism is the pillar of the Seychelles...