MoU signed between ITDC and Moroccan Agency for Tourism Development 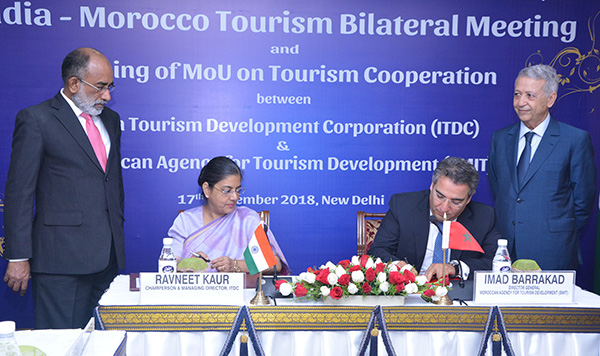 The Minister of State for Tourism (I/C), Shri Alphons Kannanthanam and the Tourism Minister of Morocco, Mr. Mohamed Sajid witnessing the signing an agreement of cooperation between ITDC, India and SMIT, Morocco, in New Delhi

TravelMail BreakingNews ( #www.travelmail.in ) #TravelNews #TourismNews #DailyNews
[dropcap]N[/dropcap]ew Delhi: A bilateral meeting on Tourism Cooperation between India and Morocco led by the Minister of Tourism, Air Transport, Handicraft and Social Economy, Kingdom of Morocco, Mr. Mohamed Sajid and the Minister of State for Tourism (IC), Government of India, Mr. K. J. Alphons, held in New Delhi today. During this meeting both the Ministers agreed to enhance the tourism cooperation between India & Morocco and to work towards increasing tourist arrivals between both countries. This meeting was followed by signing of an agreement of cooperation between the India Tourism Development Corporation and La Societe Marocaine D’Ingenierie Touristique, also known as Moroccan Agency for Tourism development (SMIT).

Tourism Industry to be driver of economic growth for Punjab: Navjot Singh Sidhu