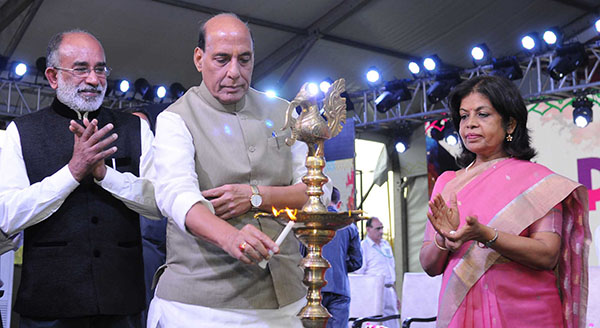 TravelMail BreakingNews ( #www.travelmail.in ) #TravelNews #TourismNews #DailyNews
[dropcap]N[/dropcap]ew Delhi: The ‘Paryatan Parv’ by the Ministry of Tourism was inaugurated by Mr. Rajnath Singh, Union Home Minister, in presence of Smt. Rashmi Verma, Secretary, Ministry of Tourism and other dignitaries from participating Central Ministries and State Governments at Rajpath Lawns, New Delhi, today. This is the second edition of “Paryatan Parv”, a nation-wide celebration of Tourism, from the 16th to 27th September, 2018.
Inaugurating the Parv, Mr. Rajnath Singh said that India is the only country where all major religions of the world, diverse culture, customs and cuisines are found and, we should see and experience this Incredible India. The Home Minister added that the Government has ensured ‘ease of travel’ through various steps like simplification of process of e-tourist visa application. The Minister also urged Indians to visit various places in the country and thereby understand its rich and varied culture & heritage also enjoy its natural beauty.
Speaking at the event, Mr. K.J. Alphons, Union Minister for Tourism said that Indians have made 1.8 billion domestic trips in the last year and added that the Ministry is aiming for double these visits in next 3 years. The Tourism Minister also called upon everyone to see, experience and get transformed by travelling across India.

During the Inaugural function the Home Minister also released the Paryatan Parv event calendar. The Ministry of Tourism also signed the MoU with Apeejay Group of Hotels and V Resorts for adoption of Jantar Mantar, New Delhi and Surajkund, Haryana, respectively, under its Adopt-a-Heritage scheme. The Home Minister handed over the MoUs and also 9 Letters of Intent for adoption of several other monuments, under the scheme, was also issued to nine companies.
The highlights of the event in Rajpath Lawns, New Delhi are the participation of a record number of 32 States / UT’s who have put up their best foot forward, which include 18 Theme Pavilions, a Food Court with 54 Stalls, bringing in the cuisine from across India; a Kitchen Studio by Institute of Hotel Management, Delhi, Crafts Bazaar with 76 Handicraft & Handloom Stalls, Yoga Demo& Training, Performances by Armed Forces Bands and an Exhibition on the theme “SaafNiyatSahiVikas” by the Ministry of Information & Broadcasting.
The 250 delegates from 60 countries, participating in the International Tourism Mart, organized by the Ministry of Tourism, also had an opportunity to savour the flavour of the IncredibleIndia on showcase at the Rajpath Lawns.
Over 3150 activities and events are taking place across the country during the 12-day event. 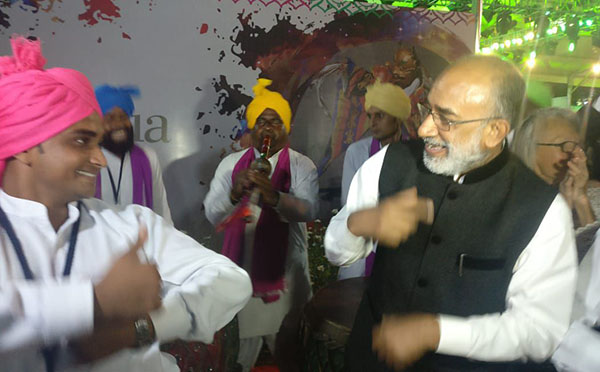 Paryatan Parv events across the country today:
Various Paryatan Parv activities began across the country along with Delhi today with The Patliputra Heritage Walk, flagged off from the Patna Museum premises at 7 am by the Commissioner, Patna Division, tourism service providers, Stakeholders and tourism students. The Walk organized by India Tourism Patna, covered important heritage sites of Patna like Patna Museum, Dr. Sachchidanand Sinha’s House, SikandarManzil, Gandhi Statue, Gandhi Museum, Gandhi Shivir and GolGhar.
Earlier in the day, India Tourism Kolkata, along with IHM, Kolkata and other stakeholders organized a Heritage Walk, from iconic Victoria Memorial Hall after a Swachhata activity, walking through the famous Queensway, Cathedral Road, Chowringhee covering Heritage monuments like St. Paul’s Cathedral, Kolkata Race Course and Indian Museum.
India Tourism Delhi, in association with Yes Global Institute & INTACH, organized a Cycling & heritage walk in Lutyens, New Delhi, with the message, ‘Save the environment, be healthy and let others be healthy’.