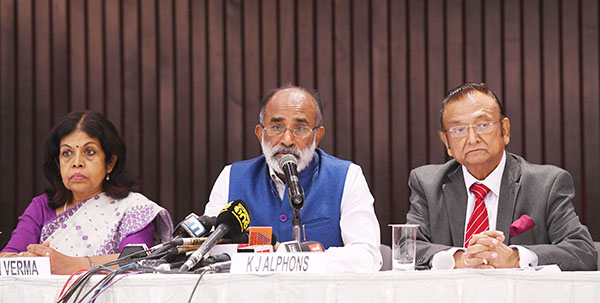 The Minister of State for Tourism (I/C), Shri Alphons Kannanthanam briefing the media about the ‘Indian Tourism Mart’ to be held from 16th to 18th September 2018, in New Delhi. The Secretary, Ministry of Tourism, Smt. Rashmi Verma and the Chairman of the organizing Committee and FAITH Secretary, Shri Subhash Goyal are also seen.

#TravelMail ( #www.travelmail.in ) #TravelNews #TourismNews #DailyNews #BreakingNews
[dropcap]N[/dropcap]ew Delhi: The Minister of State (I/C) for Tourism, Shri. K. J. Alphons announced today that the Tourism Ministry in partnership with the Federation of Associations in Indian Tourism and Hospitality (FAITH) and with the support of State /UT Governments will organize the ‘first ever’ India Tourism Mart (ITM) from 16 to 18 September, 2018 at Vigyan Bhawan, New Delhi. The objective of the event is to create an annual Global Tourism Mart for India in line with major international travel marts being held in countries across the world. The Mart will provide a platform for all stakeholders in the tourism and hospitality industries to interact and transact business opportunities.
Addressing the media in New Delhi today, the Tourism Minister said that India with its great potential in tourism and hospitality sector needs to dramatically increase the foreign tourist footfall and reap the benefits. The Minister added that the Tourism Ministry has been conducting foreign road shows, releasing theme based promotional videos and thus, the ITM 2018 will be a big step which will get buyers from all over the world. Shri Alphons also hoped that through ITM 2018, India can showcase its hidden destinations to the world, especially to emerging tourism markets like China, Latin America, and Japan etc. The Minister also hoped that with this event, the Government’s aim of bringing the Tourist footfall to double in next three years shall be fulfilled. The Minister thanked the entire Tourism Industry for coming together and for their active involvement in materializing this global event which has been due for a long time. The Tourism Minister, during the Consultative meeting with States held prior to the briefing, urged all the states to come up quickly with unique promotional videos etc. so that it can be showcased for better publicity.
Speaking at the event, the Tourism Secretary, Smt Rashmi Verma said that ITM will be the best platform for the States to showcase their products to international buyers, opinion makers and bloggers and attract more tourists to their respective states. The Secretary added that till now only few states like Kerala, Rajasthan were conducting the Tourism Marts and only a few states have participated in International Marts. Therefore, ITM 2018 will be a great opportunity for other states who neither have their own Marts nor ever participated in any International Marts to showcase themselves in front of the International buyers. Smt. Verma also conveyed that the Overseas Tourism Offices will make the list of buyers which shall be verified and finalized by a Committee which has all the Tourism/Hospitality associations so that only genuine buyers take part in the Mart.
The Chairman of the organizing committee and FAITH Secretary, Shri Subhash Goyal said that it has been for the first time that the Tourism industry stakeholders are coming together for such a large scale event and with Ministry’s support and quick decision the ITM 2018 has now been realized. He conveyed that FAITH is the apex organization of all the important trade and hospitality associations of the country with all the 10 major Tourist organizations like FHRI, HAI, IATO being involved in this mega event and India Convention Promotion Board (ICPB) shall coordinate the whole event. Shri. Goyal also said that a dedicated website shall be there for the event as follows: http://www.indiatourismmart.com/
Buyer delegates for ITM 2018 are being invited from important and potential source markets such as North America, West Europe, East Asia, Latin America, CIS countries etc. Approximately, 300+ international buyers, influencers, bloggers etc. are expected to attend the event. The international delegates from overseas markets will interact with Indian seller delegates and the buyers will include current buyers who are already selling India as well as potential buyers who are not selling India at present but have shown interest in the country. The event will also provide an opportunity to the buyers to see the world class tourism facilities available in our country such as Airports, Hotels, Tourist destinations, upcoming facilities, MICE facilities, possibility in the field of adventure tourism and other niche products.
Approximately 175-200 stalls will be provided to the sellers to enable them to interact with the buyers. These will include pavilion for States & Union Territories to showcase their unique tourism destinations and products.
The event will be formally inaugurated on 17 September, 2018 and B2B meetings between buyer and seller delegates will be held on 17 and 18 September, 2018. FAITH and State Governments will offer pre and post event FAM trips (Familiarization trips) for the buyer delegates from overseas.