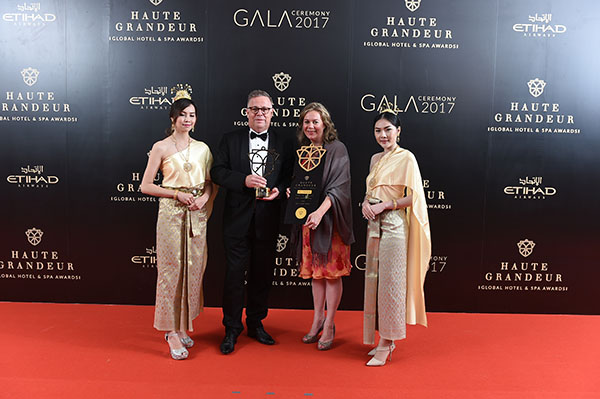 #TravelMail ( #www.travelmail.in )
[dropcap]B[/dropcap]angkok: Dusit International has continued its tradition for hospitality excellence by winning five prestigious Haute Grandeur Global Hotel Awards for two of its luxury Dusit Thani hotels – Dusit Thani Abu Dhabi and Dusit Thani Maldives.
Alongside an award for ‘Best Luxury Hotel in the Middle East,’ Dusit Thani Abu Dhabi, a five-star business hotel located in the city’s new government district, also received the award for ‘Best General Manager for the Middle East Region.’ This accolade was presented to the General Manager, Mr Desmond Hatton, during the Awards’ official Gala Ceremony, held in Bangkok, Thailand, in late October.
Dusit Thani Maldives, a luxury resort located on the stunning Mudhdhoo Island in Baa Atoll, Maldives’ first UNESCO Biosphere Reserve, added to Dusit’s haul by coming top in three prominent categories – ‘Best Luxury Hotel in the Indian Ocean,’ ‘Best Family Resort in the Indian Ocean,’ and ‘Best Hideaway Spa on a Global Level.’
The Haute Grandeur Global Hotel Awards acknowledge the most exceptional hospitality experiences across 90 categories in over 170 countries. Winners are selected through a rigorous rating process which places an emphasis on quality feedback from guests.
“We are delighted and very proud that Dusit Thani Abu Dhabi and Dusit Thani Maldives have both been recognised for their gracious hospitality and luxury services by winning these prestigious awards,” said Lim Boon Kwee, Chief Operating Officer, Dusit International. “We would like to thank the dynamic management and staff of each hotel for their excellent work in achieving this success. These awards really reflect our company-wide commitment to achieving service excellence and always going the extra mile to deliver exceptional guest experiences wherever we set foot.”
With 28 properties currently in operation across four brands in eight countries, Dusit International is in a significant growth phase which will see the number of Dusit properties exceed 70 within the next four-to-five years across key markets worldwide. Alongside Dusit Thani, other brands in Dusit International’s portfolio include dusitD2, Dusit Devarana, and DusitPrincess.

Get ready for some thrill-seeking adventure in...

Marrakech opening in 2015 to expand Mövenpick...

The Land of Gods : Himachal