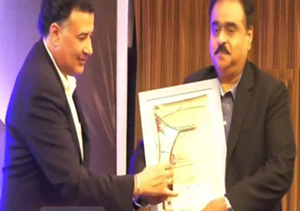 #TravelMail ( #www.travelmail.in )
[dropcap]M[/dropcap]umbai:  Dilip Datwani, President of the Hotel and Restaurant Association of Western India (HRAWI) was felicitated with the national award for his outstanding services to the hospitality sector, at the India International Hospitality Expo, one of India’s biggest hospitality summits held recently in Goa. Nominated by industry peers, Mr Datwani was unanimously chosen to be the recipient of the annual Best of India Hospitality + F & B Pro National Award 2017. The award was presented to him by Yogi Shergil, Norwegian Vice-Consul & India Director of the Government of Norway’s Seafood Council.
“The award is recognition of the association’s contribution to the industry. I am thankful to the organizers of the event and industry people who were kind enough to nominate my name for this prestigious award. My team and I will continue to work in the best interests of hoteliers and restaurateurs and remain an active voice of the industry,” says Mr Datwani, President, HRAWI.
Mr. Datwani is also the Vice President of the Federation of Hotel and Restaurant Associations of India (FHRAI), the apex body of all the regional associations of hotels and restaurants across the country.
Mr Datwani has been an active voice and part of the hotel and restaurant fraternity for over two decades. Known for actively promoting the interests of the industry, he has in the past officiated in several capacities including Chairman of the Membership Committee, Chairman of the Classification Committee, and Senior Vice President of HRAWI; besides being an Executive Committee Member of FHRAI.
The event also felicitated prominent hoteliers, restaurateurs, chefs and various other personalities in the hospitality sphere. The ceremony was held at the 13th India Hospitality + F & B Pro Expo that brought together various new technologies, management techniques, industry leaders, professionals to benefit the hospitality sector.

THE MOST BEAUTIFUL HAVELI HOTELS IN RAJASTHAN

Faasos offers 20% introductory discount to all...

Over 175 professionals to showcase their skills...