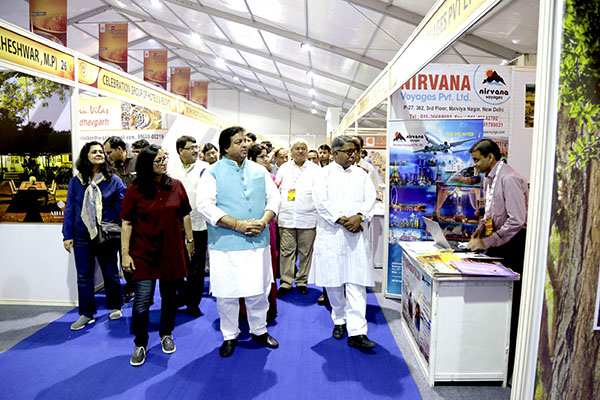 #TravelMail ( #www.travelmail.in )
[dropcap]B[/dropcap]hopal: Minister of State for Tourism (IC) Shri Surendra Patwa while inaugurating the forth MP Travel Mart said that such efforts will give new identity to development of tourism in Madhya Pradesh at national and international level. Activities related tourism and employment opportunities will increase. Chairman of Tourism Development Corporation Shri Tapan Bhaumik was present on this occasion.
Minister of State Shri Patwa said that Bihar, Gujarat, Karnataka and Manipur States have exhibited their own activities of tourism sector in the travel mart. He said that this will increase the prospects of tourism industry and arrival of tourists in Madhya Pradesh. Investment in tourism sector and inter-region tourism will get boost. Important sectors like hotels and hospitality will get new direction from the travel mart.
The Minister described the ten national awards received by the state as a major achievement. He said that the department is committed to ensure the safety of foreign tourists in the state. Shri Patwa also released the book ‘Every one’s Business’ penned by Shri Gour Kanjilal. The Minister Shri Patwa visited 76 different stalls in the Travel Mart.

Launch of Book ‘Every Ones Business” at Travel Mart

Puri-Somnath Special to have stoppages at Srikakulam...

Whisky cocktails here to stay (May 21...