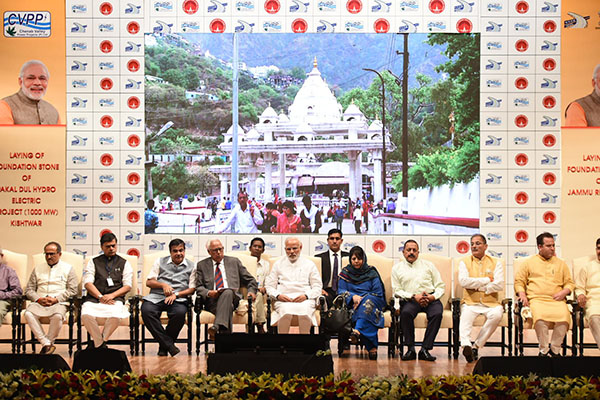 #TravelMail ( #www.travelmail.in ) #TravelNews #TourismNews #DailyNews #BreakingNews
[dropcap]N[/dropcap]ew Delhi: The Prime Minister, Shri Narendra Modi, today inaugurated the Tarakote Marg and Material Ropeway, of the Shri Mata Vaishno Devi Shrine Board.
In his address, the Prime Minister said that the Tarakote Marg would provide an alternative route to the Mata Vaishno Devi Shrine, which would facilitate pilgrims. He said tourism, especially spiritual tourism, is a very important source of income generation for the State of Jammu and Kashmir.
Earlier, he also unveiled a plaque to mark the commencement of work on the Zojila Tunnel. The 14 km long Zojila tunnel will be India’s longest road tunnel and Asia’s longest bi-directional tunnel. The Cabinet Committee on Economic Affairs, chaired by the Prime Minister, had approved the  construction, operation and maintenance of this tunnel between Baltal and Minamarg, on the Srinagar-Leh section of  NH-1A, at a total cost of Rs 6800 crore earlier this year. The construction of this tunnel will provide all-weather connectivity between Srinagar, Kargil and Leh. It will cut down the time taken to cross the Zojila pass from the present three and a half hours, to just fifteen minutes.

A New book by Gour Kanjilal launched in New Delhi

Novotel in North-East India this year

Do more for less this summer with...