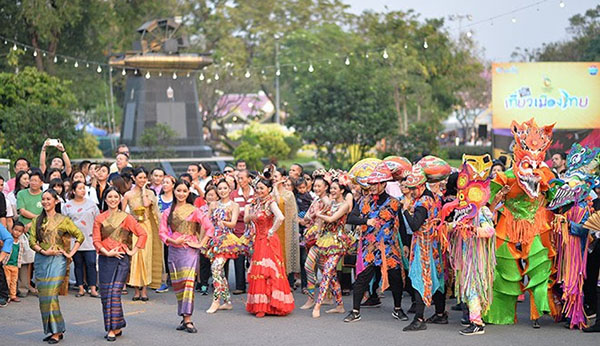 #TravelMail ( #www.travelmail.in ) #TravelNews #TourismNews #DailyNews #BreakingNews
[dropcap]B[/dropcap]angkok: This year’s popular Thailand Tourism Festival (TTF) held at Lumphini Park in Bangkok was attended by 687,783 Thai and foreign visitors, up 8.64% over the 2017 event.
Designed to highlight key outstanding landmarks, cultural heritage, and the best products from the North, South, East, Central Region, and Northeast Thailand, the Festival allowed visitors a chance to immerse themselves in Thainess or the Thai way of life through watching and taking part in various activities available at the five uniquely-designed Thailand tourism villages.
This year, the Festival was visited by 651,188 Thais and 36,595 foreigners. They spent an estimated 390.5 million Baht, the vast majority of which (181 million Baht) was spent on food and beverage followed by crafts and products (154.71 million Baht).
The visitor survey conducted by TAT showed a satisfaction rate of 91.7% by Thai visitors and 98.2% by foreign visitors.
Amongst the 860 booths, the Top Ten Favourite Destinations were: Chiang Mai, Chiang Rai, Phuket, Surat Thani, Nan, Krabi, Kanchanaburi, Mae Hong Son, Trang and Satun.
Most visitors agreed that the TTF 2018 successfully showcased the boundless variety and diversity of travel and tourism products and services nationwide in one place.
Visitors were also pleased with the Thai traditional performances of each region, beautiful backdrops for taking photos and selfies, affordable products in the Pracharat Ruamjai zone, as well as the project to boost environmental awareness in the “lucky garbage” zone.
One very popular activity zone was “Follow in the King’s Footsteps”, a specific area dedicated to commemorating the life and times of Thailand’s beloved late monarch, King Bhumibol Adulyadej.
The Festival also included a concert performance by the well-known Thai saxophonist, Koh Mr. SaxMan and the Sound of Siam, and 20 musicians worldwide. Their repertoire featured a special ‘Open to the New Shades’ album of 13 songs that reflect the artists’ impressions of the kingdom as a melting pot of history, culture and unique ways of life.
Visitors enjoyed food from Bangkok’s 50 districts as well as regional dishes, a daily traditional or contemporary performance on the main stage and the “Discover Thailand” daily parade.
Yuthasak Supasorn, Governor of the TAT, said, “Because this festival was also widely covered by the Thai media, we are optimistic that the publicity generated will boost travel to provincial Thailand, in line with our strategy to promote the rural areas, better balance visitor flows and distribute tourism income nationwide.
“I would like to thank all the visitors for coming, and the many people at all levels who worked so hard to make this festival a success,” he added.