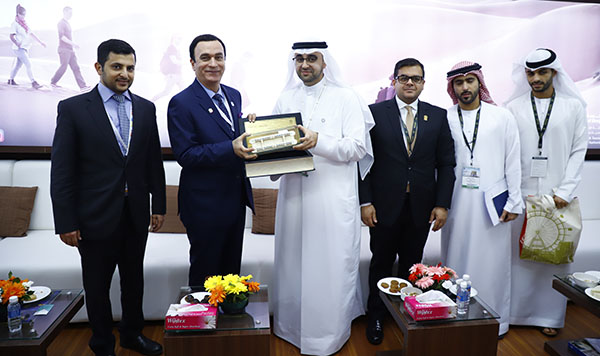 #TravelMail ( #www.travelmail.in ) #TravelNews #TourismNews #DailyNews #BreakingNews
[dropcap]N[/dropcap]ew Delhi: The Sharjah Commerce and Tourism Development Authority (SCTDA) participated in South Asia Travel and Tourism Exchange (SATTE), South Asia’s leading travel trade show, in New Delhi, where it showcased the emirate’s best tourist spots, popular leisure activities, and unique culture and traditions.
This latest announcement came as SCTDA forges ahead its ongoing local, regional, and global initiatives designed to promote Sharjah as an ideal family-friendly destination. SCTDA also put the emirate on the international tourism and business maps in line with the government’s economic development plans. During the three-day SATTE event, SCTDA  focused on Sharjah’s key factors of family-friendliness as well as distinction and exclusiveness which makes it one of the top places to visit among the global tourists looking for adventure and a distinctive travel experience.
H.E. Khalid Jasim Al Midfa, Chairman of the SCTDA, said: “India is undisputedly one of the largest key markets for the tourism and travel industry around the world. In fact, 138,000 Indian guests stayed in Sharjah hotel establishments during 2017. As the South Asian nation is one of our priority markets, this year’s SATTE was an opportunity to encourage more Indian tourists to explore Sharjah’s beauty and discover its culture.  We utilized SATTE’s popularity to enhance the emirate’s brand and profile in major markets and cities worldwide as well as achieve growth in terms of the number of international tourist arrivals in 2018 and in the coming years.”
“The Authority is keen to strengthen relations with the Indian market by organizing roadshows in Indian cities in combination with workshops and meetings with major tourism agencies, resulting  in agreements on the exchange of tourism between the two destinations”, he added.
By taking part in this year’s event, SCTDA is confident that it would be able to broaden its reach to international visitors and embrace new partnerships. SCTDA was a leading delegation of important tourism and travel partners, including Sheraton Hotel, Ramada Hotel, Air Arabia, Sharjah Airport Travel Agency (SATA), Al Bait Hotel, Centro Sharjah and Golden Tulip.
Sharjah has consistently been selected as one of the UAE’s most prominent cultural hubs and a bastion of civilization by regional and international institutions. The emirate has also been named The Culture Capital of the Arab World (UNESCO); Islamic Culture Capital 2014; the Capital of Arab Tourism; and the Capital of the Arab Press. These achievements have strengthened its presence in the regional and global tourism industries.