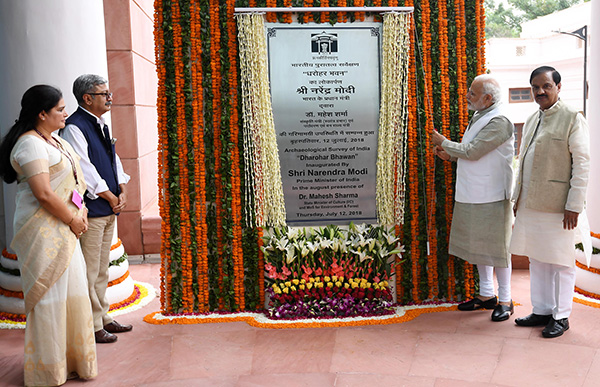 TravelMail Breaking News ( #www.travelmail.in ) #TravelNews #TourismNews #DailyNews
[dropcap]N[/dropcap]ew Delhi: The Prime Minister of India, Mr. Narendra Modi, inaugurated ‘Dharohar Bhawan’ – the new Headquarters building of the Archaeological Survey of India (ASI), – at 24, Tilak Marg in New Delhi today. The Minister of State for Culture (I/c) Dr. Mahesh Sharma, Secretary Culture, Mr. Raghavendra Singh and Director General of ASI, Smt. Usha Sharma and senior officers of M/o Culture and ASI were present on the occasion.
Speaking on the occasion, the Prime Minister said that the Archaeological Survey of India has performed significant work over the course of last 150 years since its inception. The Prime Minister emphasized the importance of taking pride in our history, and in our rich archaeological heritage. He said that people should take a lead in knowing about local history, and archaeology of their towns, cities and regions. He said lessons in local archaeology could form part of the school syllabus. In this context, he also mentioned the importance of well-trained local tourist guides, who are familiar with the history and heritage of their area. The Prime Minister said that India should showcase its great heritage with pride and confidence, to the world.
Addressing the gathering, Minister of State for Culture(I/c) Dr. Mahesh Sharma applauded the efforts of ASI which is now taking care of about 3686 monuments across the country and has also been delivering conservation services in other countries in the world like Afghanistan, Myanmar, Cambodia. He said that the rich Cultural Heritage that our country is endowed with, is our identity and that the world has recognised India’s rich culture and heritage. He said that under the able leadership of the Prime Minister, since 2014 Ministry of Culture has been successful in getting World UNESCO recognition for several heritage properties, both tangible and intangible. The Minister added that 40 antiquities from Foreign countries have been retrieved and efforts to bring back 8 to 9 more antiquities are in place.
The new Headquarters building of ASI has been equipped with state-of-the-art facilities, including energy efficient lighting and rainwater harvesting. It includes a Central Archaeological Library with a collection of about 1.5 lakh books and journals. The library is a unique and valuable treasure trove in India and the World for those who are keen to undertake research work in the field of Archaeology, Religious and Cultural perspective of India, India’s ancient past and allied subjects.
The Library is special as it houses Authentic records related to Archaeology, such as ASI reports, etc., Diary of Alexander Cunningham(founder of ASI), John Marshall, etc. which are great source for researchers throughout the world. The Library has Original collection of religious books and books on cultural heritage of India, such as the sacred books on the Hindus, Manusmiti, Kautilya’s Athasastra, etc. which are in great demand by the researchers. Original, specific and holistic collection on places of India, such as Kalhan’s Rajtarangini, on Kashmir, History of Gujarat, etc. are also available. Original and rare books on inscriptions, such as Kharosti, Brahmi etc. and Huge collection of Tibetan manuscripts (rare) which is very helpful to the scholars.
Rare portfolios related to Ajanta, Ellora and many sites of archaeological importance, Large collection of books on Archaeology, Epigraphy, Indology, Indian culture and its past, etc which make the library unique and distinct from others and many more are available in Central Archaeological Library.

SriLankan Airlines bans use and charging of...

Pride Festivals in various parts of the...