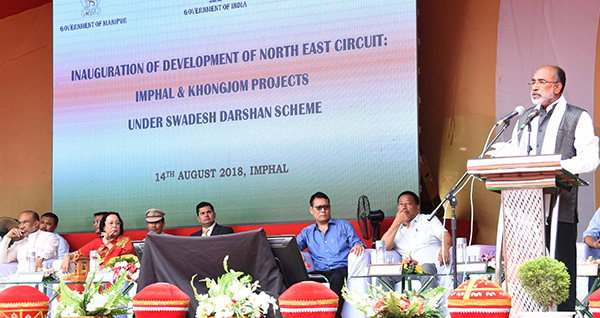 The Minister of State for Tourism (I/C), Shri Alphons Kannanthanam addressing at the inauguration of the ‘Development of North East Circuit: Imphal & Khongjom projects’ under Swadesh Darshan Scheme, in Imphal, Manipur. The Governor of Manipur, Dr. Najma Heptulla, the Chief Minister of Manipur, Shri N. Biren Singh and other dignitaries are also seen.

TravelMail BreakingNews ( #www.travelmail.in ) #TravelNews #TourismNews #DailyNews
[dropcap]N[/dropcap]ew Delhi: The Governor of Manipur, Dr. Najma A. Heptulla inaugurated the project “Development of North East Circuit: Imphal & Khongjom” implemented under the Swadesh Darshan Scheme of Ministry of Tourism, Government of India at a function held at the historic Kangla Fort in Imphal, Manipur today. The project is the first project to be completed under the Swadesh Darshan Scheme of the Government of India. The Project was inaugurated in the presence of Shri N Biren Singh, Chief Minister of Manipur, Shri K.J. Alphons, Union Minister of State (I/C) for Tourism, State Ministers of Manipur and Smt. Rashmi Verma, Union Tourism Secretary.
Speaking on the occasion, Dr. Najma A. Heptulla drew the attention of the Government to the huge potential of the tourism industry of the state which comes in the form of culture, sports, arts, ecology, history, handloom and handicrafts.
A message from the Prime Minster, Shri Narendra Modi was also read out by the Union Minister of State (I/C) for Tourism Shri K.J. Alphons stating that tourism will bring the people of the country together and it will serve in cultural growth and bring prosperity to the country. In his message, the Prime Minister further said that tourism is an engine of growth through job creation which will ultimately eradicate poverty.
Union Minister of State (I/C) for Tourism, Shri K.J. Alphons in his speech congratulated the Government of Manipur for the commendable work in tourism sector of the State and suggested to come up with good projects and expressed his willingness to be generous on the projects to be taken up in North East.
The Chief Minister of Manipur, Shri N Biren Singh in his remarks proposed 3 more projects for development and strengthening of eco, ethnic and sports tourism at Loktak Lake, Mapithel Dam and Shadu Chiru. He also expressed his happiness on the progress of Kangkhui cave tourism project.
The Swadesh Darshan scheme is one of the flagship schemes of Ministry of Tourism for development of thematic circuits in the country in a planned and prioritised manner. The scheme was launched in 2014 -15 and as on date the Ministry has sanctioned 70 projects for Rs.5708.88 Crore to 29 States and UTs under the Scheme. 30 projects / major components of these projects are expected to be completed this year.
The project which was inaugurated today in Manipur was sanctioned by the Ministry of Tourism in September 2015 for Rs.72.30 Crores. The project covers two sites i.e. Kangla Fort and Khongjom. Kangla Fort is one of the most important historic and archaeological site of Manipur located in the heart of the Imphal city. Kangla has a special place in the hearts and minds of the people of Manipur. The old Govindajee Temple, outer and inner moat and other relics are perfect reflections of the rich art and architectural heritage of Manipur. Under this project, Ministry has carried out works like Restoration & Improvement of Outer & Inner Moat and Rejuvenation of Sacred Ponds; Reconstruction of Old Rampart; Sound and Light Show, Construction of Rock Garden, Utility Block; Audio Guide, Eco Friendly Conveyance, Development of Crafts Houses and Parking on Naga Nullah; Polo Gallery; Reception and Ticket Counter. The above work has been carried out at a cost of Rs. 63.90 Crore. Khongjom is the place where the last war of resistance of Anglo Manipur War of 1891 was fought. Under the project a Pedestrian bridge and rejuvenation of Kombirei Lake has been carried out for Rs.4.89 Crore.
Development of Tourism in North Eastern Region is prime area of focus for the Ministry of Tourism. The Ministry is carrying out an array of activities for development and promotion of tourism in the region. The Ministry is developing the tourism infrastructure in the region under its schemes of Swadesh Darshan andPilgrimage Rejuvenation and Spirituality Augmentation Drive (PRASAD). Together under both the schemes Ministry has sanctioned 15 projects covering all North Eastern states for Rs.1301.47 Crores.
The Ministry is carrying out an array of activities for development and promotion of tourism in the region. The efforts of Ministry have shown positive results and the Foreign tourist arrivals in the region has shown an upward trend over the years. The region received a total of 1.69 lakh foreign tourist visits during 2017 as against 1.45 lakh in 2016 registering a growth of 16.7% over 2016. The Domestic Tourist Visits reached to 95.47 lakhs in the year 2017 against 77.71 lakhs registering impressive double digit growth of 22.8% over 2016. The increased number of tourists in turn has created better employment opportunity for the local population in the region.
A number of facilities like Tourist Facilitation Centres, Interpretation Centres, better last mile connectivity, heliports, wayside amenities region, SEL Shows, Eco Log Huts, Rope Way, Golf Course, theme parks etc. are being developed up in the region under the above schemes to enhance the experience of tourists when they visit the region. Ministry is also dedicatedly promoting North Eastern Region by showcasing its varied attractions, uniqueness in terms of natural beauty and culture in international and domestic markets. The Ministry organises International Travel Mart every year in one of the North eastern state with objective of providing platform to these sates to showcase its tourism potential to perspective international and domestic buyers and opportunity to interact with them. This year the 7th Edition of ITM is scheduled to be held in November 2018 in Agartala, Tripura.