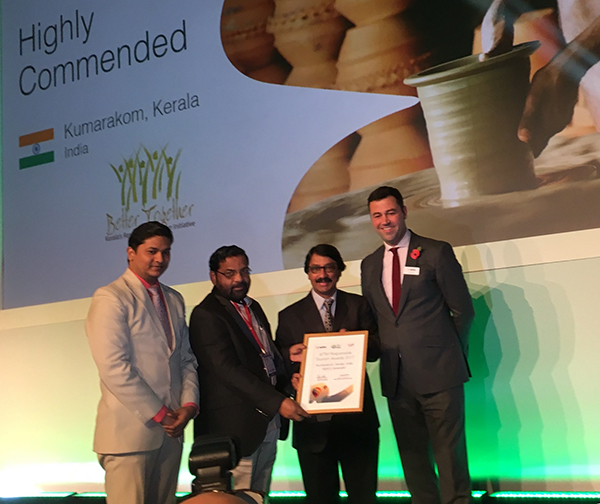 #TravelMail ( #www.travelmail.in )
[dropcap]T[/dropcap]hiruvananthapuram: Sharing the sustainable practices and ethical methods to drive the responsible tourism agenda, Kerala Tourism participated in a three day-long World Travel Market London 2017 to highlight success of the state’s “Responsible Tourism Mission” at a global platform.
Shri Kadakampally Surendran, Honorable Minister for Co-operation, Tourism and Devaswoms, Government of Kerala led the state’s delegation to the trade event, which showcased Kerala’s best-selling products, including its award-winning Responsible Tourism initiatives, pristine beaches, hill stations, backwaters, houseboats and Ayurveda therapies, among an array of offerings. On the occasion, Honorable Tourism Minister launched an initiative of the Kerala Tourism Development Corporation (KTDC) – ‘AyurBodha’, highlighting the significance of Ayurvedic practices to attract tourists from across the globe.
A special session on “Kerala’s Responsible Tourism Mission” was organized on Monday (Nov 6), moderated by Harold Goodwin, WTM Responsible Tourism Advisor wherein Jose Dominic, CEO, CGH Earth Hotels, Cochin, Kerala, India & Xu Jing, Regional Director for Asia and the Pacific, UNWTO were present along with Dr. Venu.
Honorable Tourism Minister inaugurated the Kerala Pavilion followed by the launch of KTM brochure 2018. The pavilion was themed around Backwaters and Houseboats. The backwaters were brought to life through a two-minute film that was shot using a 360-degree technology via six cameras simultaneously. Visitors were invited to don a VR headset and get virtually transported 2,000 km away to a boat floating on the tranquil waters, listening in to conversations of locals going about their daily lives and watching the picturesque coconut palms, rolling paddy fields, birds, the sunset and other vistas from an actual cruise passing by.
The overwhelming response received by Kerala Tourism pavilion was a testimony and reflection of Kerala’s stature on the world tourism map. Tourism remains one of the most important sectors for Kerala. The state has been keen to develop the potential of the state further by catering to foreign tourists through such prestigious events.
The WTM’s location added to its importance as the UK is the primary source market for Kerala Tourism. Kerala received 1,55,548 tourists from the UK last year, accounting for 17 per cent of the total foreign tourist arrivals to the state. Kerala Tourism has been conducting road shows in Britain and has been participating in the World trade Mart (WTM) for the last two decades.
Sharing views on the sustainable development approach, Shri Kadakampally Surendran, Honorable Minister for Co-operation, Tourism and Devaswoms, Government of Kerala said,“Owing to the tremendous growth of Indian tourism industry, there is an immediate need to invest and focus on sustainable tourism practices across the world to conserve India’s vibrant heritage. Kerala Tourism has always been on a forefront to promote tourism in a responsible manner.”
“Recently, Kerala Tourism initiated a first of its kind initiative in India- PEPPER (People’s Participation for Planning and Empowerment through Responsible Tourism), aimed at promoting unexplored and pristine destinations through people’s participation in the process of tourism planning.” Honourable Minister further added.
At the event, Dr. Venu was amongst the key panelists for a discussion on contribution of tourism sector in local economic development, chaired by BBC presenter Tanya Beckett on Wednesday (Nov 8).
Highlighting the significance of Responsible Tourism at the event, Dr. Venu, IAS, Principal Secretary, Department of Tourism, Government of Kerala stated, “It gives us immense pleasure to be a part of the World Travel Market London 2017 that provides a global platform to draw special attention of the world leaders towards the significance of our ambitious Responsible Tourism mission. Under Responsible Tourism mission, Kerala Tourism has developed a community tourism network to include the local community not just as a participant, or even a beneficiary, but as a leader.”
“We at Kerala Tourism launched the Responsible Tourism mission with an objective of generating more employment and income for the local community at various destinations across Kerala. The focus has also been on the promotion of socially relevant and environment friendly activities.”, Dr. Venu further added.
This year, the Awards ceremony focused on the Sustainable Development Goals (SDGs) in the following categories; Best for Accommodation, Best for Carbon Reduction, Best for Communication, Best Community Initiative, Best for Poverty Reduction and Best Tour Operator. Kumarakom Responsible Tourism Initiative spearheaded by the tourism department of Kerala was awarded with the highly Commended Responsible Tourism Award at WTM London.
More than 600 women, 500 farmers and 230 homesteads are earning money through this Responsible Tourism initiative: through self-employment, producer groups, micro-enterprises and innovative village life experience tours. The judges were impressed by the scale of the achievement in securing benefits for the local community and the zero waste and cleanliness campaigns. The judges were also impressed by the new state-level Responsible Tourism Mission and the efforts being made to extend the initiative across Kerala to benefit many more communities and to measure and report impacts.
Speaking on the occasion, Mr. P. Bala Kiran, IAS, Director, Kerala Tourism and Managing Director, Kannur International Airport stated, “With the aim of providing training, conducting research and studies in specific fields, “Responsible Tourism Mission” is aimed at promoting green principles in construction and waste management while protecting regional art and culture. In addition to that, the initiative has been providing employment to women and marginalised community”.
Kerala Tourism was accompanied by twelve private exhibitor-partners at the event; Alhind Tours And Travels Pvt Ltd, Grand Hyatt Bolgatty, Jayasree Travels and Tours Company, Kerala Tourism Development Corporation, Kumarakom Lake Resort, Pioneer Personalized Holidays, Punarnava Ayurveda Hospital Pvt Ltd, Raviz Hotels and Resorts, Spiceland Holidays, Uday Samudra Leisure Beach Hotel and Xandari Resorts.
Early this year, Kerala was pegged as a ‘Destination to Watch’ in 2017 by the Association of British Travel Agents (ABTA), U.K.’s largest and most influential body of travel agents and tour operators. Described as a ‘true haven for travellers’, Kerala was the only Indian state on the list of 12 tourist hotspots.

CITE 2015 to provide industry players with...