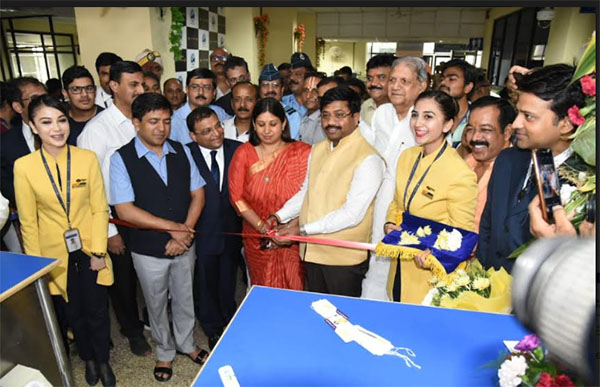 #TravelMail ( #www.travelmail.in ) #TravelNews #TourismNews #DailyNews #BreakingNews
[dropcap]M[/dropcap]umbai: Jet Airways commenced its services under the Government’s Regional Connectivity Scheme (RCS) – UDAN by linking the holy city of Allahabad with the state capitals of Lucknow and Patna.
Of the 7 sectors that Jet Airways has been awarded in the second round of bidding under the UDAN scheme, the airline is launching 5 this week, including Lucknow-Allahabad-Lucknow, Patna-Allahabad-Patna, Nagpur-Allahabad-Nagpur, Indore-Allahabad-Indore, and Delhi–Nashik-Delhi. Services on the remaining two routes viz. Lucknow–Bareilly–Lucknow and Delhi-Bareilly-Delhi are expected to be launched in the coming days, once necessary clearances and approvals have been received for the Bareilly airport.
Jet Airways will deploy its 72-seater ATR aircraft on the RCS routes that connect Allahabad with various other destinations in its network. Operating thrice a week, the new routes will offer Allahabad a 6 day/ week connectivity, complementing the existing connectivity to/from the city.
Ahead of the launch of the service from Allahabad, the airline conducted a multi-faith pooja and lit a ceremonial lamp to mark the occasion. The lamp-lighting ceremony was graced by Mr. Shyama Charan Gupta, Member of Parliament, Lok Sabha from Allahabad; Mr. Surya Pal Gangwar, Special Secretary, Civil Aviation Department, Uttar Pradesh; Dr. Ashish Kumar Goyal, Divisional Commissioner, Allahabad Division, Air Mshl SBP Sinha PVSM AVSM VM AOC-in-C, HQ CAC, IAF, Air Mshl AS Butola VM VSM SASO, HQ CAC, IAF, Mr. Mishra, Airport Director, Allahabad and Mr. Amit Agarwal, CFO and Dy. CEO, Jet Airways in the august presence of Mr. Nand Gopal Gupta, Hon’ble Minister of Civil Aviation and Stamp, Uttar Pradesh, who was the Chief Guest on the occasion. Mr. Suhyas LY, District Magistrate, Allahabad also graced the inauguration ceremony. This was followed by a ceremonial ribbon-cutting and felicitation of the first guest with the boarding pass which was handed over by senior Jet Airways officials and the VIPs, marking the inauguration of the flight.
Speaking on the inauguration, Amit Agarwal, CFO and Dy. Chief Executive Officer, Jet Airways, said “Jet Airways has been connecting India with the rest of the world for over 25 Years and we are proud to now launch our service connecting the holy city of Allahabad with state capitals as part of the Regional Connectivity Scheme (UDAN). We are thankful to the Government of Uttar Pradesh who have extended incredible support in facilitating the launch of these services. We look forward to working closely with them as Jet Airways strengthens its network to provide Metro and emerging cities with regional connect as well as one-stop global linkages, enabling guests to travel to a host of destinations on its domestic and international network via convenient connections.”
The new flights will offer two-way connections to Mumbai from Allahabad via Nagpur/Indore/Lucknow. Similarly, the flights offer two-way connections to Bengaluru from Allahabad via Indore/Patna. Guests also have the choice to connect to Pune and Ahmedabad from Allahabad, via Indore. Likewise, the flight will also connect to Mumbai, Delhi, Bengaluru, Chennai, Hyderabad, Pune, Jaipur and Abu Dhabi from Allahabad via Lucknow, allowing guests to connect through Abu Dhabi over Lucknow to multiple international destinations in Europe, North America, Africa, Middle East and the Gulf, enhancing the global connectivity from India’s emerging metros.