Jaisalmer, India’s golden city, to be the latest addition on SpiceJet’s network 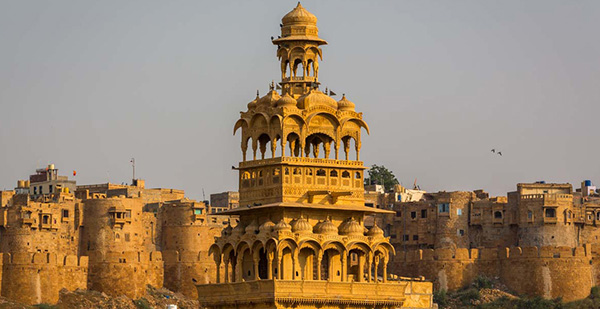 #TravelMail ( #www.travelmail.in )
[dropcap]G[/dropcap]urugram: SpiceJet will add Jaisalmer to its domestic network effective October 29, 2017 making it the first and only airline in the country to provide direct air connectivity between Jaisalmer and the Capital.
SpiceJet will also introduce direct flights between Jaisalmer and Jaipur from October 29th making it the only Indian carrier to connect the two key tourist and business destinations of Rajasthan. The airline will also recommence flights between Delhi and Jodhpur from the same day. Jaisalmer will be SpiceJet’s 45th domestic destination.
Jaipur-Jaisalmer will be the fourth sector under UDAN or the regional connectivity scheme for SpiceJet. The route will be serviced by the Bombardier Q400. Tickets for the RCS seats on the Jaipur – Jaisalmer route will be available at INR 2,330 (all in) whereas the RCS fare on the Jaisalmer – Jaipur route will be INR 2,280 (all in).
Shilpa Bhatia, Chief Sales and Revenue Officer, SpiceJet said, “Scheme UDAN has been on a fabulous pursuit of bringing the un-served and under-served airports on the national flight map and taking flying to the masses. The fact that Jaisalmer will now be offered air connectivity after a wait of 16 long years speaks volumes for UDAN. SpiceJet will continue to constantly endeavour to enable the common man fly while connecting many more small towns and cities in times to come.”
SpiceJet, besides rendering attention on regional connectivity has been introducing a slew of new daily direct flights connecting key metros to new stations with business and tourism interest which has drawn the attention of tourists and business community alike. The airline which was awarded 6 proposals and 11 routes under UDAN has introduced four new flights under the scheme and is the only airline which hasn’t sought subsidy or viability gap funding for the same.
The first flight SG 2981 on the Jaipur – Jaisalmer route will start from Jaipur at 11:00 am and reach Jaisalmer at 12:25 pm. On its return journey the flight SG 2982 will depart at 4:55 pm and reach Jaipur at 6:15 pm. Flight SG 2983 on Jaisalmer – Delhi route will depart from Jaisalmer at 12:45 pm to reach Delhi at 2:35 pm and flight SG 2984 will depart from Delhi at 3:20 pm to reach Jaisalmer at 4:55 pm.
Bookings for tickets are now open on www.spicejet.com, SpiceJet’s mobile app and through online travel portals and travel agents.
Flight Schedule