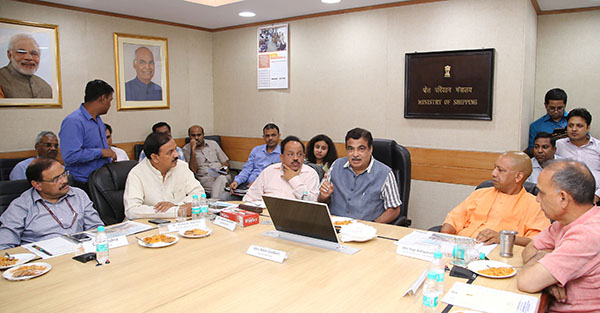 ( TravelMail BreakingNews ) #www.travelmail.in #TravelNews #TourismNews #DailyNews
[dropcap]N[/dropcap]ew Delhi: A High level Inter ministerial meeting was held in New Delhi today to deliberate on various issues and actions to be taken on war footing to conserve The Taj Mahal. The meeting mainly focussed on action points needed to overcome Air and Water pollution in and around Taj Mahal. The meeting was chaired by The Minister for Road Transport & Highways, Shipping & Water Resources, River Development & Ganga Rejuvenation, Mr. Nitin Gadkari and attended by Minister for Environment Forest & Climate Change Dr. Harsh Vardhan, Minister of State for Culture (I/C), Dr. Mahesh Sharma and Minister of State for Water Resources, River Development & Ganga Rejuvenation, Dr Satyapal Singh. The Chief Minister of Uttar Pradesh, Mr. Yogi Adityanath also attended the meeting. DG, ASI, Commissioner Taj Trapezium Zone (TTZ), members TTZ, DM Agra and other officers of the concerned ministries and district administration also took part in the meeting.
Later briefing the media, Mr. Nitin Gadkari informed that the Government respects the SC observations on Taj conservation and will take every possible steps to deal with Air and Water pollution in and around Taj Mahal.
To deal with air pollution, the Minister said that the use of bio fuel, green fuel and electric vehicles will be popularised in Agra. An ethanol policy will be introduced for Agra which will include conversion of bio mass to ethanol during the crop burning season and use of ethanol auto rickshaws combined with introduction of mass rapid transport system as a part of policy of zero tolerance to pollution.
He also announced the formation of a committee under the Chairpersonship of Secretary, M/o Environment, Forest and Climate Change, Mr. C. K. Mishra including experts from NEERI, IITs and experts from various organizations to look into the issue of industrial pollution. The committee will study on case to case basis and take a tough stand on hazardous industries in the vicinity of the Taj Mahal.
To deal with the water pollution in the Yamuna, Mr. Gadkari said the cleaning of the Yamuna falls under the Namami Ganga project since it is a tributary of the Ganga and several projects are already been taken up to make the river pollution free. He explained that 36 projects of Rs. 4000 Crores on the river Yamuna have been identified and it is hoped that the DPRs will be completed in next few months. Already 11 projects have started in Delhi on the river Yamuna and the tender for the 12th project will be finalised soon.
Among some of the measures to be taken up includes afforestation along the Yamuna, construction of rubber dam, solid waste management, developing a 35 KM long garden along the water front of Yamuna in Uttar Pradesh, Haryana and Delhi.
The Chief Minister of Uttar Pradesh, Mr. Yogi Adityanath said that the State Government takes the observations made by the Supreme Court very seriously and is fully committed to work closely with the central government as well as other organization to find the solution to the problem of pollution in and around the Taj. Construction of rubber dam in the downstream of Yamuna and STPs on the Yamuna in Mathura, Vrindavan and Agra are being taken up, he said.
The meeting concluded with Mr. Nitin Gadkari remarking that the Government has taken a serious note on the Supreme Court observations and will file an affidavit in the Supreme Court putting forward all the steps and actions taken up by the Government to conserve Taj Mahal.

Curries and Wine Discoveries at Vivanta by...

Change of Guard Ceremony to be held...

Introduction of new trains between Hisar-Haridwar &...