Govardhan Teerth in Mathura to have world class amenities: K.J.Alphons 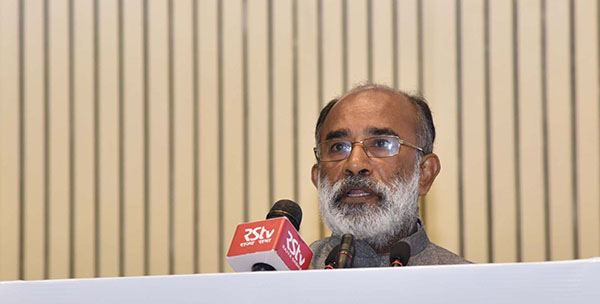 ( TravelMail BreakingNews ) #www.travelmail.in #TravelNews #TourismNews #DailyNews
[dropcap]N[/dropcap]ew Delhi: The Minister of State (I/C) for Tourism, Mr. K. J. Alphons has said that Govardhan Teerth of Mathura needs to be made into a world class destination and the Govardhan Maharaj Utsav shall be organized in October every year.  The Minister conveyed this after a site inspection in Mathura to assess the requirements for development of facilities at a meeting with the officials of State Government. Shri. Alphons added that it has also been decided, in-principal, to include tourism amenities at Kusum Sarovar, Mansi Gate, Chandra Sarovar for development of facilities for pilgrimage in the project. In addition, provision for installation of CCTV, PA system, Wi-Fi system signage’s will also be included.  The Uttar Pradesh State Government will be submitting a Detailed Project Report in this regard.
Earlier, the UP State Government had submitted a proposal for development of infrastructure facilities at Govardhan Teerth in Mathura. During the visit, the Minister has announced Rs. 50 crore for the development of Govardhan Parikrama. Till date, projects worth Rs. 118.23 crores have already been approved by the Ministry of Tourism under PRASHAD Scheme during the last four years, which are under various stages of implementation in Mathura and Varanasi in the state.
The ‘National Mission on Pilgrimage Rejuvenation and Spiritual, Augmentation Drive’ (PRASAD) has been launched by the Ministry of Tourism in the year 2014-15 with the objective of holistic development of identified pilgrimage and heritage destinations. After discontinuation of HRIDAY scheme of the Ministry of Housing and Urban Development and for inclusion of projects for development of Heritage destinations in PRASAD Scheme, the scheme guidelines have been modified and the nomenclature of the scheme has also been changed from PRASAD to “National Mission on Pilgrimage Rejuvenation and Spiritual, Heritage Augmentation Drive (PRASHAD)” in October 2017.
The total number of sites identified for development under the scheme at present are 24. They are Amaravati and Srisailam (Andhra Pradesh), Kamakhya (Assam), Patna and Gaya (Bihar), Dwarka and Somnath (Gujarat), Hazratbal and Katra (Jammu & Kashmir), Deogarh (Jharkhand), Guruvayoor (Kerala), Maa Chintpurni, Una (Himachal Pradesh, Omkareshwar (Madhya Pradesh), Trimbakeshwar (Maharashtra) Puri (Odisha), Amritsar (Punjab), Ajmer (Rajasthan), Kanchipuram and Vellankani (Tamil Nadu), Varanasi, and Mathura (Uttar Pradesh), Badrinath and Kedarnath (Uttarakhand) and Belur (West Bengal). Till date total 24 projects have been approved with estimated expenditure of Rs. 727.16 crore and a total amount of Rs. 267.44 crores has been released for these project during the years 2014-15, 2015-16, 2016-17, 2017-18 and the current financial year.