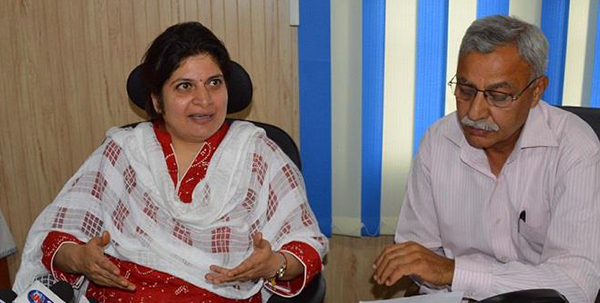 #TravelMail ( #www.travelmail.in ) #TravelNews #TourismNews #DailyNews #BreakingNews
[dropcap]J[/dropcap]AMMU:  Tulip garden developed by the Department of Floriculture at Sanasar would be thrown open for public on March 29, 2018.
This was informed by Director Floriculture, Jammu Ms. Babila Rakwal during a press conference.
She informed that the garden in Sanasar has been developed on four kanals given by Patnitop Development Authority to develop it as major tourist attraction.
She further informed that three varieties of Tulips including Double Early Largo, Single Early Candelillia and Single Early Purissima would be displayed in the garden.
She said that the department is contemplating to develop Tulip garden in Bhaderwah as it has suitable climatic conditions for their plantation. The seeds of these Tulip plants would be given to the farmers so that they can increase its crop, she stressed.