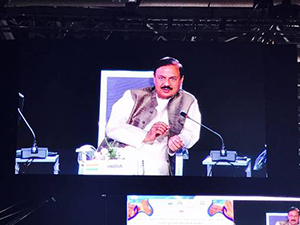 #TravelMail ( #www.travelmail.in ) #TravelNews #TourismNews #DailyNews #BreakingNews
[dropcap]T[/dropcap]he Minister of State for Culture (IC) and Environment, Forest & Climate Change, Dr. Mahesh Sharma led the Indian delegation to the second UN World Tourism Organization/UNESCO World Conference on Tourism and Culture, with focus on sustainable development, which was held in Muscat, Capital city of Oman, during 11-12th December, 2017.
Speaking during the Ministerial Dialogue on Tourism, Culture and Sustainable Development, Dr. Mahesh Sharma highlighted India’s approach to sustainable development, while preserving nature and India’s cultural heritage. The Conference had also on its agenda themes such as culture and tourism as a factor of peace and prosperity; tourism development and protection of cultural heritage; culture and tourism and urban development and creativity; and exploring cultural landscapes in tourism. The conference also finalized the 2030 Agenda.
During his visit to Muscat, Dr. Mahesh Sharma also held bilateral discussions on cooperation between India and Oman in fields of culture and tourism. He met Minister of Tourism of Oman, Ahmed Bin Naseer Bin Hamad al-Mehrzi and discussed cooperation in field of tourism, including early conclusion of the MoU on cooperation in tourism between India and Oman. There is a huge potential expanding tourism exchanges between the two countries. People of Oman, due to their familiarity with India, visit India, including for medical treatment.
Dr. Mahesh Sharma also met with Minister of Heritage and Culture of Oman, H.H. Sayyid Haitham bin Tariq Al Said and discussed with him the ways for expanding cultural exchanges between the two countries. He also had a brief interaction with Deputy Prime Minister for Council of Ministers of Oman, H.H. Sayyid Fahd Bin Mahmoud Al Said with focus on expanding the strategic partnership between the two countries. On the sidelines of the conference, Dr. Mahesh Sharma held a bilateral meeting with Minister for Culture and Tourism of Turkey, wherein the two sides agreed to institute a joint committee to explore areas for mutual cooperation in fields of culture and tourism between India and Turkey.
There is a large Indian Community in Oman, numbering around 0.8 million. Reflecting the commitment of the Government of India to promote welfare of Indian communities abroad, Dr. Mahesh Sharma addressed a gathering of Indian community at the Reception hosted on 12th December at the Embassy in his honour by Ambassador of India to the Sultanate of Oman, Shri Indra Mani Pandey and invited them to utilize the opportunities offered by the fast growing economy of India for investments and participate whole heartedly in flagship projects of the Government like ‘Make in India’, clean India, Digital India, Skill India. He also invited the community to join the campaign for building a New India by 2022, launched by the Honourable Prime Minister.

AirAsia offers 50 percent off on return...