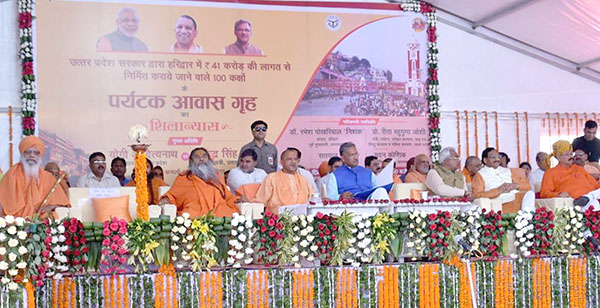 #TravelMail ( #www.travelmail.in ) #TravelNews #TourismNews #DailyNews #BreakingNews
[dropcap]D[/dropcap]ehradun: Uttarakhand Chief Minister Mr. Trivendra Singh Rawat and Uttar Pradesh Chief Minister Yogi Adityanath ji laid the foundation stone and ‘Bhoomi pujan’ of 100 room tourist residences to be built at a cost of Rs. 41 crore at Hotel Alaknanda premises at Haridwar.
Uttarakhand Chief Minister Mr. Trivendra Singh Rawat in his address on the occasion said that during the last one year due to meaningful efforts between Uttarakhand and Uttar Pradesh, many issues related to division of assets and liabilities between the two states have been resolved. 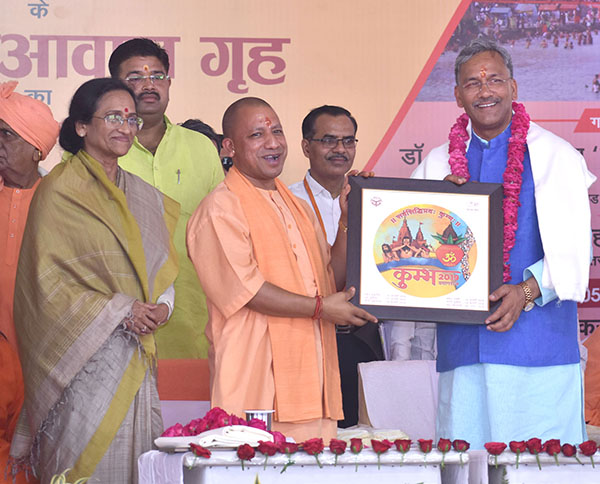 Praising the style of functioning of Uttar Pradesh Chief Minister Yogi Adityanath, Chief Minister Mr. Trivendra Singh Rawat said that it was due to the capacity of Yogi ji to take quick decisions that an agreement on irrigation canals and Hotel Alaknanda could be reached. For easier and stronger inter- a state service of buses, an agreement was signed between the two states. He further said that both states with understanding will take decisions on ponding issues of division of assets and liabilities and resolve them. The Chief Minister said that to promote tourism both the states have to start working on joint ventures. 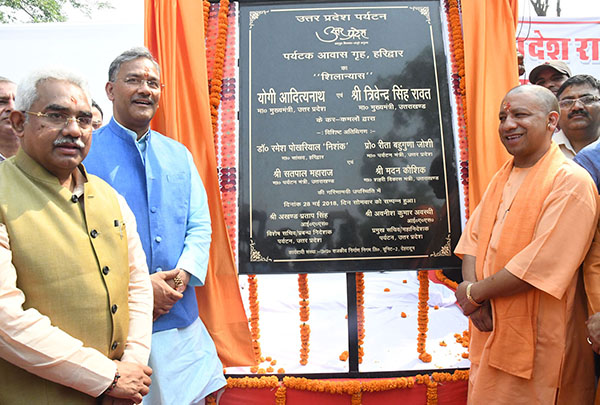 Similarly for conservation and preservation of water, both the states have to come up with long term policy. He said that to preserve water it is necessary to collect rain water which would help protect the eco-system. “ Both the states have to work together in the field of water conservation,” he said.
Uttar Pradesh Chief Minister Yogi Adityanath ji said that it was due to the successful efforts of Uttarakhand Chief Minister Mr. Trivendra Singh Rawat that the issue of Alaknanda Hotel has been resolved and Uttar Pradesh has laid the foundation stone and did ‘Bhoomi Pujan’ of new tourist building of  Uttar Pradesh at Haridwar. He said that the new tourist building will be named as Bhagirathi Tourist residences. The building of the new tourist facility will be based on Uttarakhand architecture. He said that all the pending issue of division of assets between the two states will be resolved through negotiations in next two months. Chief Minister Yogi said that Uttar Pradesh will support any initiative to promote tourism taken by Uttrakhand. He said that it was due to the pious rivers of Ganga and Yamuna originating from Uttarakhand that north India is best fertile land in the country and most of the flow of these rivers is in Uttar Pradesh. He praised the efforts of the Uttarakhand government of water conservation and checking polythene. He said that to maintain the continuous flow and cleanliness of Ganga river everybody has to shoulder their responsibilities. ‘Namame Gange’ should not be a government programme but everyone should participate in it, he said. 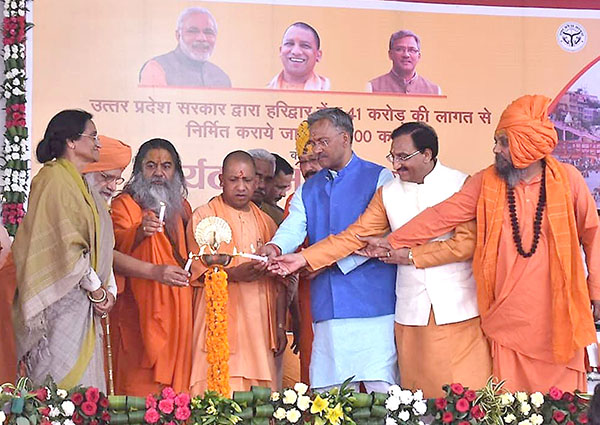 He said that before the Kumbh mela at Allahabad on in 2019, a work plan has been made to stop the flow of all the sewers and Nallahs falling into Ganga river by December 2018. For this 1556 villages along Ganga river in 27 districts in Uttara Pradesh have been identified. He said that the issue of division of assets pending for the past 17-18 years will be resolved by both the states in amicable atmosphere. This work will be inspired by the dream of Prime Minister Mr. Narendra Modi of “EK Bharat, Shresth Bharat.”
On this occasion, Haridwar MP and former Chief Minister Ramesh Pokhriyal Nishank, Tourism Minister Satpal Maharaj, Urban Development Minister Madan Kaushik, Uttar Pradesh Tourism Minister Prof. Reeta Bhauguna Joshi, MLAs Suresh Rathore, Sanjay Gupta, Dehsraj Karanwal, Jagatguru Ramanandacharya, Swami Shyamdevacharya Maharaj, Swami Baba Ramdev, Swami Arjunpuri ji Maharj, Mahant Ravinderpuri Maharaj, Uttara Pradesh Principal Secretary Tourism Avnish kumar Awasthi, District Magistrate Haridwar Deepak Rawat were present.

Jumeirah at Saadiyat Island Resort to open doors on 11 November

Onset of Monsoon over Kerala

Spiti Valley – An adventure on wheels