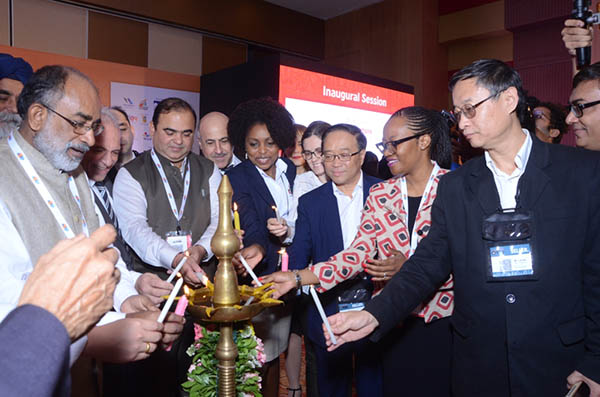 #TravelMail ( #www.travelmail.in ) #TravelNews #TourismNews #DailyNews #BreakingNews
[dropcap]M[/dropcap]umbai: OTM is the largest travel trade show in the entire Asia Pacific region. The three day event is being held at Bombay Exhibition Centre in Mumbai. The event was inaugurated in the presence of the Chief Guest Shri. K J Alphons, Minister of State for Tourism (I/C), Government of India and Guest of Honour, Shri. Jaykumar Rawal, Minister of Tourism, Government of Maharashtra.
Speaking at the inauguration, Shri. K J Alphons, Minister of State for Tourism (I/C), Government of India remarked, “I am happy to know that OTM has emerged as the leading travel trade show in the Asia Pacific region, India has 5000 years old civilisation and a huge heritage for the world to explore. The country has innumerable tourist destinations from The Himalaya Mountains in the North to the backwaters in the South.
Indian tourism also offers spiritual tourism and cultural heritage with its widely spread civilisation in the sub-continent. I am grateful to the Government of India and Prime Minister Narendra Modi for their effective efforts, regular outreach to the world community and the Indian Diaspora, which has positively changed the outlook of India for tourism in the country. The Ministry of Tourism is working to bring in confidence building mechanisms to establish India as a peaceful and safe destination,” he further added. 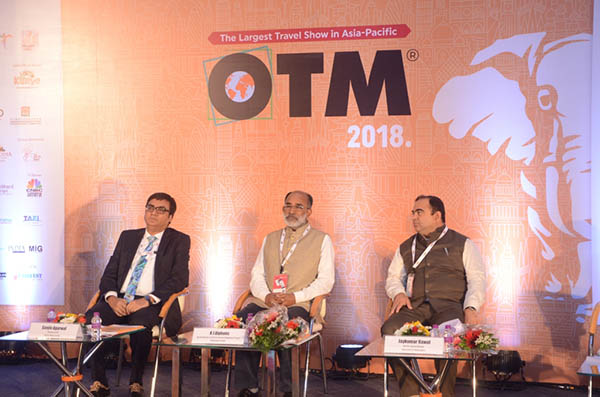 India is one of the largest markets of travel and tourism in the world. Indians take some 22 million trips abroad and more than a billion within the country. Mumbai is the largest source market of domestic and outbound travel for Leisure, Business, Meetings, Incentive, Conventions and Events (MICE) and Weddings. It serves literally as the ‘gateway of India’ to the largest number of travellers going abroad from other cities and towns in Western and Southern India.
OTM is Asia Pacific’s Largest Travel Show. People from across the travel industry participate in this event which helps in promoting the tourism industry. This event has a legacy of 28 years and after Germany and London, OTM Mumbai is one of the largest travel trade shows globally. With the help of this platform, our efforts are to showcase the treasure of tourism that we possess in Mumbai, Maharashtra and the rest of the country, said Shri. Jaykumar Rawal, Minister of Tourism, Government of Maharashtra.
Over the decades, OTM has emerged as the largest travel trade show in Asia Pacific region, in terms of rented area. It is also the most international travel trade show in India, with more than 50 countries and over 25 states being represented in OTM this year. The three-day travel show is focused on B2B transactions between close to 1200 exhibitors and 15,000 plus trade visitors and buyers.
With $ 209 Billion spend in 2017, India’s tourism industry was ranked 7th largest in the world. It contributes about one-tenth to the GDP and employment. The public policy thrust of the present government in the centre and the state, OTM hopes to consolidate its lead as the largest travel trade show in the Asia Pacific region in the coming years.
India’s leading tour operator Cox & Kings is conducting destination workshops, as the Knowledge Partner. “OTM is the premier show in Western India that is growing faster and it gives us an opportunity to engage with the B2B market,” said Karan Anand, Head-Relationships, Cox & Kings.
“Turkish exhibitors wait for OTM. Western India is a very promising source market for Turkey, contributing 35% of all Indian arrivals, most of it through the gateway city of Mumbai. This makes our participation in OTM Mumbai all the more important,” says Ozgur Ayturk, Coordinator of Asia and Pacific in the Turkish Ministry of Culture and Tourism.
National Tourist Organisations of Turkey, Greece, Indonesia, Thailand, Egypt, Nepal, China, Kenya, Maldives, Rwanda, Macao, Bangladesh, Korea, Japan, Bhutan, Tanzania, Romania, Cambodia, Palestine, Cyprus, Croatia, New Zealand, Fiji, Botswana, Finland, Estonia, Lithuania have set up colourful country pavilions, along with a large number of their hotels, attractions and operators from every destination.
“This year we are promoting ourselves as MICE as well as a Wedding and Film destination and OTM is a right platform for us to do so,” said Demetrios A Theophylactou, High Commissioner of Cyprus in Mumbai.
“We participate at OTM every year and consider this to be very important event. Special workshops on Wedding and Films are good signs that the show is evolving every year,” remarked Ismail A Hamid, Egyptian Tourism Counsellor in Egyptian Tourism Office, based in Mumbai. 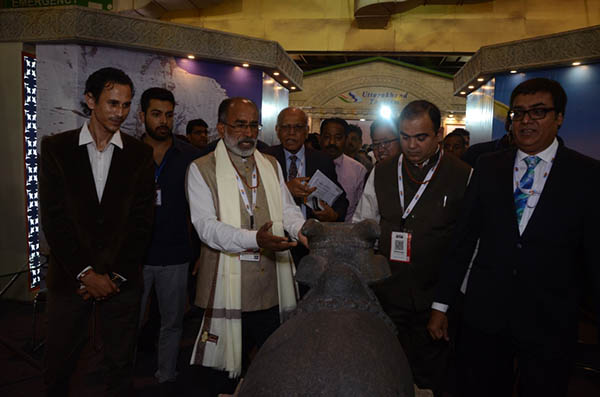 Technology is driving disruptive changes in the travel industry. OTM is also hosting travel technology tracks, with sessions on innovative travel tech solutions, panel discussions with industry’s thought-leaders, innovation showcase, and digital skill development, in collaboration with TravHQ.
Australia, Bulgaria, Canada, Dubai, Germany, Hong Kong, Iran, Kazakhstan, Laos, Latvia, Malaysia,  Oman, Peru, Philippines, Qatar,  Russia,  Seychelles, Singapore, Sri Lanka, Ukraine, United Kingdom, USA, Uzbekistan and Vietnam  are represented through private operators at OTM 2018.
Greece is returning to OTM 2018 in a much bigger way after its debut last year. “Tourism Ministry of Greece is extremely delighted to be a part of this beautiful and big exhibition,” said Elena Kountoura the Greek Tourism Minister.
Indian destinations have as much strong a presence in OTM as their international counterparts. Tourism departments of Himachal Pradesh, Uttarakhand, Jammu & Kashmir, Maharashtra, West Bengal, Goa, Gujarat, Odisha, Arunachal Pradesh, Andhra Pradesh, Karnataka, Punjab, Andaman & Nicobar, Jharkhand, Madhya Pradesh, Chandigarh, Tripura have set up enchanting state pavilions, with operators from their respective states present.
“J&K gets the maximum number of domestic tourists from the states of Gujarat followed by Mumbai, both in Western India. Therefore both- the tourism board and the private suppliers in the region eagerly wait for the OTM,” remarked Mahmood Shah, Director, Kashmir Tourism.
In addition to buying and selling activities on the OTM showfloor, hundreds of crores of business leads would be generated, there are a number of meeting sessions, workshops and panel discussions on the sides. These are enriching and thought provoking meeting sessions, with leaders and professional experts from India and abroad.
60% of the travel show is all about India. About 22 mn Indians travel abroad, but there is immense scope to boost the inbound travel in India. We should also look forward to bring more tourists from the rest of the world to India and serve this an opportunity to explore the exotic tourists destinations in the country, said Sanjiv Agarwal, CEO, Fairfest Media Ltd.
“For the stakeholders in the travel trade who are looking for serious business and networking opportunities, OTM is a must-visit,” remarked Mahendra Vakharia, President, Outbound Tour Operators Association of India (OTOAI).
Promoting tourism through film shoots is an attractive strategy adopted by many countries and states. For example, Cyprus offers 35% cash rebate and a host of other benefits to producers. Cine Locales @ OTM is a session aimed at connecting film and television fraternity with international and domestic destinations interested in catering to the lucrative market of film and TV producers.
Phocuswright, the global travel market research company, will be conducting a session on understanding the Millennial Travellers, whose needs may be very different from the previous generation.
To promote relatively unexplored North-East region of India, a special session is being organised, under the aegis of Ministry of Development of North East Region and NETDC.
“For adventure tour from the region,” added Captain Swadesh Kumar, President, Adventure Tour Operators Association of India (ATOAI). Western India is the strongest market. OTM is indispensable in connecting to the tourism stakeholders.
Buyer-seller speed networking sessions add a new dimension to the show, where selected hosted buyers are seated in a smaller hall and the exhibitors go around to meet them, reversing the normal process of buyers going around in the exhibition to meet the sellers, for a limited time on the first day.
India’s Ministry of Tourism is flying in international buyers, to buy from OTM, which also boasts of the largest display of Indian destinations under one roof.
OTM is supported by leading travel trade associations like TAAI, OTOAI, NIMA, TAFI, IATO, ADTOI, ATOAI, IAAI, TAAP, MTOA, TAAN, SATA, SKAL, ETAA, UTA and Titanz.
“OTM has reached an international level where the whole industry comes down. It is one of the most sought after travel marts,” opined PP Khanna, President, Association of Domestic Tour Operators of India (ADTOI).
OTM is the best travel trade fair in India. It is of international standards and is way better than any other travel show in the country,” remarked Gajesh Girdhar, Founder and National Coordinator, Network of Indian MICE Agents (NIMA).
Over the decades, OTM has emerged as the largest travel trade show in Asia Pacific region on couple of parameters. One is the number of participants and the other is the gross exhibition area rented by the organisers. It is also the most preferred international travel trade show in India, with more than 50 countries participating in OTM 2018. The three-day show is focused on B2B transactions between 1200+ exhibitors and 15,000+ trade visitors and buyers.

24 Special Trains between Chennai Central and...