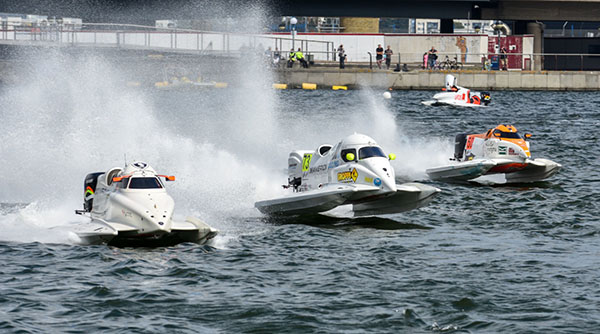 TravelMail BreakingNews ( #www.travelmail.in )
[dropcap]N[/dropcap]ew Delhi: The sixth round of F1H2O World Championship is all set to create a new benchmark in Amaravati. The global sporting event is making a grand comeback to India after a long gap of 14 years. The racing extravaganza will be held on the banks of River Krishna from November 17 – 18, 2018.  All international teams and drivers are raring to unleash their best on River Krishna and showcase the world class sport of powerboat racing for the first time in India in nearly a decade and half.
The resident organising committee of the F1H2O Grand Prix is focusing on water sport culture awareness in the region which will also help sustain the local fishermen communities in the area. This is one of the foundation of the Amaravati development project.
Marco Pietrini, Director of Logistics is working closely to set up the teams and is extremely happy with the progress of the state in hosting the gala event, “I am delighted to be here in India and receive the great hospitality from the people of Amaravati. The state of Andhra Pradesh has made arrangements to put up a grand and gala show for all spectators and visitors and I am confident this initiative will take the sport to greater heights in the years to come. I won’t be surprised if India has its own team competing on the global arena in the coming years.”
The capital city is gearing up to welcome visitors from across the globe to witness the event. The 23 km stretch along the River Krishna will turn into a carnival site celebrating best of the sport along with a host of other exciting activities to engage the crowd and showcase arts, culture and delectable cuisine of Andhra Pradesh. APTA will also set up viewing galleries near Punnami Ghat and will close the Prakasam Barrage during the two-day event. On 16th November, the powerboats will have a free practise session. On Saturday, 17th November, teams will be battling for pole position while on Sunday afternoon Grand Prix India will start after another free practise session and a spectacular parade tour.
Jonas Andersson, the lead driver of Team Amaravati from India, has been putting his finest efforts to get the best performance in the championship and bring laurels to the country.
Mr. Himanshu Shukla, CEO, Andhra Pradesh Tourism Authority said, “We are happy to invite you to witness the spectacular event that will change the way grand sporting events are held in the country. All eyes will be on Amaravati and we are proud to put our country on the global sporting map with the F1H2O grand prix. Elaborate planning is being done in terms of hospitality and logistics, to welcome spectators and race enthusiasts from across the country and the globe. AP Tourism has been applauded for all the initiatives taken so far and we intend to create solid resonance for Amaravati with F1H2O.”
Sandeep Mandava, CEO, India Xtreme of Malaxmi Group, spoke on the occasion and shared further plans “We are glad to have Mr. Marco Peitrini, Director of Logistics, F1H2O in Amaravati to help and guide us. His experience is invaluable and we are confident that with his guidance we will have an event that will be remembered in days to come.”
The leading edge F1H20 championship will represent India on the global sporting map and will also witness the sporting ethos and infrastructure in the country. The gala event will be a cherry on top which will also help promote tourism in the state and showcase its outstanding culture on the global stage. This year the championship began in Portugal on May 18 and will end in Sharjah on December 15. The race in Amaravati will see the world’s top teams in action including teams from Portugal, Italy, UAE, France and our very own, Team Amaravati.

Planning to visit Jammu: Watch out for these Hidden Treasures

Beat the heat with The Janpaths’ healthy...