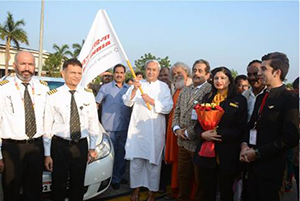 #TravelMail ( #www.travelmail.in ) #TravelNews #TourismNews #DailyNews #BreakingNews
[dropcap]B[/dropcap]hubaneswar: Odisha Chief Minister Shri Naveen Patnaik inaugurates the Air India direct flight from Bhubaneswar to Bangkok at the Biju Patnaik International Airport.
Opening of the new international air link fulfils long-time aspirations of the people of the state who had to travel to other airports to catch their flights abroad. At the same time it signals Odisha’s rising prominence as an international destination. 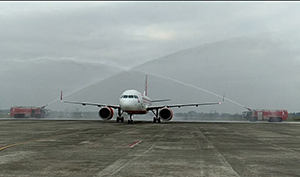 Mr Patnaik said “It is a truly humbling feeling to see the dreams of Biju Babu, the ace pilot, for international air connectivity from Odisha being realised. The direct flight to Bangkok will give a big boost to tourism and open up vistas for stronger economic and cultural ties between Odisha and Thailand, which share relationship from ancient times.”
He congratulated Air India for starting the international flight service from Bhubaneswar. “I expect the National carrier to take this forward by establishing flight connectivity to other prominent international destinations from Odisha,” he added.