Kerala records significant rise of 10.94% in Tourist arrivals in Year 2017 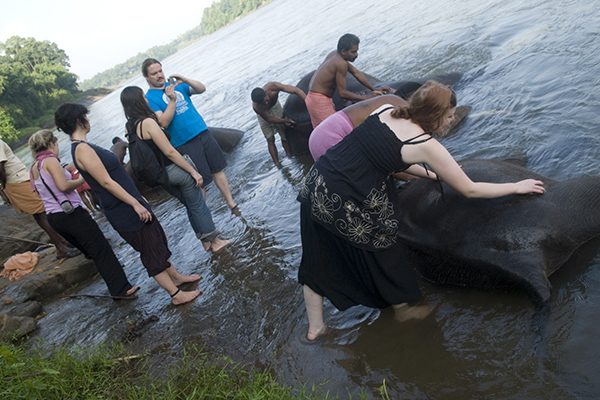 #TravelMail ( #www.travelail.in ) #TravelNews #TourismNews #DailyNews #BreakingNews
[dropcap]T[/dropcap]hiruvananthapuram:  The year 2017 recorded the highest number of tourism arrivals in the past nine-year period, with a 10.94 percent rise compared with the figures of last year. An increase of 15.54 lakh new tourists – domestic and foreign travelers combined – was recorded this year, with footfalls going up to 1,57,65,390 in 2017, as against 1,42,10,954 in 2016.
The year 2017 also recorded the highest number of domestic tourism arrivals in the past nine-year period, with the number posting an 11.39 percent rise compared with the figures of 2016. An increase of 15 lakh new domestic tourists was recorded this year, with footfalls going up to 1,46,73,520 in 2017, as against 1,31,72,535 in 2016.
Year 2017 saw the highest domestic footfall in Kochi City with a total number of 23, 05,627 tourists visiting Kerala’s commercial capital. It may be seen that aspects such as MICE Tourism, Lulu Mall, Wonderla water theme park, the metro nature of Kochi city were those that brought in more domestic tourists to Kochi city. Meanwhile, the adjacent destinations such as Fort Kochi (2,02,535), and Maradu (98,047) also registered significant rise in domestic footfall.
The temple town of Guruvayur bagged the second place in terms of domestic tourist preference, while Thiruvananthapuram City came third.The fourth is Kovalam and fifth Kozhikode city, sixth Wayanad district, seventh Munnar, eighth Kumarakom, ninth Alappuzha and tenth Thekkady.
Taking into account the numbers between 2013 and 2016, it has been seen that Guruvayur, which used to be the prime destination of domestic tourists during the past few years, fell in prominence, to the second slot this year. However, the pilgrim destination has been witnessing tourist arrivals of more than 20 lakh per year for the last four years. In 2016, the footfall in Guruvayur was 2336394 which reduced to 2138632 this year. Kozhikode city, in the meantime, fell to fifth position in 2017 and  Kovalam to fourth.
The hill station of Munnar recorded a footfall of 6,28,427 with an increase of 34.31 per cent over the previous year. Domestic tourists were seen increasingly visiting Munnar –in 2013 the number was 3,68,816 and it rose to 6,28,427 in 2017. Over the past five years, increase in percentage of domestic tourist inflow to Munnar increased by 70.39 per cent. In the meantime, Wayanad district registered a footfall of 7, 11,546 with 25.08 percent increase over 2013, and the beach destination of Kovalam registered a growth rate of 41.42 percent over 2013.
The increase in flow of pilgrims to Padmanabhaswamy temple pushed up footfalls in Thiruvananthapuram city to 12,17,446, showing a growth of 18.63 percent over 2016. The growth rate is 47.04 percent over year 2013.
Foreign tourist arrivals to Kerala have registered a significant growth of 5.15 percent during the year 2017, compared with the figures of the previous year. According to statistics compiled by Kerala Tourism, Kerala saw as many as 10,91,870 foreign travellers arriving at its famed destinations in 2017. This is against the total number of 10,38,419 tourists who arrived from foreign lands in 2016.
It has also been found that foreign tourists preferred travelling to Thiruvananthapuram and Ernakulam districts, while also opting to visit destinations like Alappuzha, Munnar and Wayanad.
In terms of specific locations, both foreign and domestic tourists were found to have preferred Kochi city as a prime destination. Considering the foreign tourist arrivals, Kovalam came second in preference and Varkala third. The fourth  most preferred location was Fort Kochi, while the fifth slot went to Thiruvananthapuram city, sixth to Alappuzha, seventh to Maradu in Ernakulam, eighth to Kumarakom, ninth to Munnar and the tenth slot was taken up by Thekkady. Foreign travelers showed a liking for hotels and other accommodation units in Kochi city while they toured Kerala.
A comparative look at the trends throw up results which showed that Kovalam, which was the prime destination of international tourist till 2015, has been losing its charm in 2016 and 2017 over Kochi. Meanwhile, nearby beach destinations like Varkala and Poovar showed significant growth.
While the growth rate of  Kovalam was just 5 percent in the last five years, Varkala registered a growth rate of 130.02 percent in the last five years, with the total foreign footfall in Varkala zooming to 1, 33,658 in 2017. Further, there has also been a specific increase in the number of foreign tourists visiting Kochi city, Fort Kochi and  Maradu, at 43.89 percent over the last 5 years.
Total figures of these three destinations increased from 2,52,548 in year 2013 to 3,63,400 in year 2017. Meanwhile, foreign tourist visits to Kumarakom and Thekkady fell.
According to Sri Kadakampally Surendran, Minister for Tourism, Cooperation and Devaswoms,  the statistics show up encouraging trends in terms of increasing footfalls both in the international as well as domestic segments. The domestic tourism circuit has shown laudable numbers, and it is heartening that the 2017 recorded the highest number of domestic tourism arrivals in the past nine-year period.
Smt Rani George IAS, Secretary, Department of Tourism, said that the trend in tourist arrivals over the past 5 years has shown a marked change in the pattern of tourist visits to different destinations. It is exciting that more destinations are being sought after by tourists, and that shows more destinations in Kerala are gaining in prominence in travelers’ minds, she said.
According to Sri P Balakiran IAS, Director, Kerala Tourism, the tourist arrival statistics have been compiled from all accommodation units of the state by Kerala Tourism on a regular basis. The statistics includes only the figures of tourists who are staying in accommodation units and hence the figures of day time visitors and flowing tourists have not been taken into account, he added.