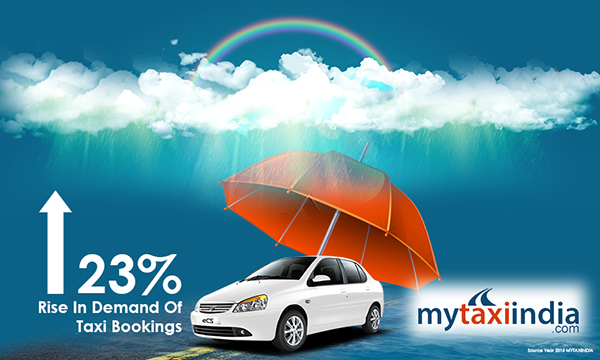 #TravelMail ( #www.travelmail.in ) #TravelNews #TourismNews #DailyNews #BreakingNews
Yes, the monsoons is the season of pakodas, chai and romance. With the heavy scent of wet soil, your soul tends to soar out and explore. Alas, the streets are too murky to walk about. Lucky for the fact that you have a car…but, you don’t want to dirty it. Well, taxis are a good option but finding Nemo would be easier that finding a taxi.
India, during monsoon, is a mud trap of sorts. With muck all around, you don’t feel like walking through the streets. Unfortunately, the cabs have a different tune in mind.  People don’t want the hassle of driving during the monsoon and so more people opt for taxis. This influx of need turns taxis into a demand. Yet the number of taxies on street is less, as compared to the number of commuters. Hence, high demand and low supply.
Depending upon the urgency of the travel, cabbies try to take advantage. This behaviour reaches its apogee during monsoon, where dire conditions make commuters desperate enough to go along with whatever exorbitant demand cabbies make.
Owing to heavy rains and poor condition of roads across the nation, commuters have been forced to bear the brunt of a sudden increase in instances of refusal to ply by taxi drivers. While there were 128 complaints on refusal to ply lodged with the police in June, the number increased to 334 cases in July.
Here are a few points that throw a light on the conundrum of this situation:
* Cab drivers, like every sales person, has a target to meet. During the monsoon season, cabbies hike their pricing. Hence this target is met and cabbies don’t find any reason to go out of their ways to drive, leaving commuters stranded.
* Traffic is a big issue here as due to water-logged streets, it’s difficult to commute. So that route which took 30 mins to cover last month, takes an hour and half today.
*  Break-down chances of the vehicles increase during monsoon, with extensive plying in waterlogged streets leading to water entering into the engine. Yet, it spells trouble, if a car breaks down in a waterlogged street as it gets difficult to reach to the nearest repair station.
* Delay in arrival is a huge issue as navigating through waterlogged streets slows down efficiency that delays the cab to a great extent. The water in the streets act as an enabler to decrease speed and rotation of the wheel, explain the sluggish place.
All these don’t serve as an issue for people at MyTaxiIndia.  The founders, Anshuman Mihir & Mohit Rajpal highlighted “In the past year we have seen a rise of people availing MyTaxiIndia by 23%. This solidifies our customer base, with more people opting us. We always keep the convenience of customers in mind, with our efficient drivers going that extra mile to provide assistance when in need. Our cabs are equipped with umbrellas, so that commuters are not left soaking wet on the road. Also our delays are lesser in number, with a cab driver on dial every 5 seconds. The attractive packages come as a benefit, especially our monsoon sale-commuters wait for this with bated breath.” In a nutshell-we are for the customer, to serve the customer.