#TravelMail ( #www.travelmail.in ) #TravelNews #TourismNews #DailyNews #BreakingNews
AccorHotels is pleased to announce that it has successfully reached agreement with a wholly-owned subsidiary of the Abu Dhabi Investment Authority (“ADIA”) to restructure a portfolio of 31 hotels (4,097 rooms) in Australia.
The agreement involves a portfolio which was purchased by the ADIA subsidiary in 2013 and operated by AccorHotels.
Under the restructure of the portfolio of 31 hotels:
AccorHotels will convert 15 triple-net leases into 50 year management agreements and extend the management term of one hotel also to 50 years (total 16 hotels);
AccorHotels (HotelInvest) will acquire the real estate of the remaining
15 ibis and ibis Budget branded properties for AUD$200 million (€137 million);
“This deal is in line with our stated strategy to optimise cash flow generation, reduce earnings volatility and restructure lease contracts into owned and managed hotels”, said John Ozinga, COO of HotelInvest. “The acquisition of the economy hotels in key locations is a signal of our continued focus on supporting the Group’s growth strategy by holding a selective portfolio of profitable hotel property assets,” he added said.
The hotels are located in prime locations including Sydney’s Darling Harbour, Sydney Olympic Park and in Canberra, Australia’s Capital City. The portfolio is also spread across city and regional locations in New South Wales, Victoria, Northern Territory, Western Australia and Queensland and encompasses the Pullman, Novotel, Mercure, ibis, ibis Styles and ibis Budget brands.
The acquisition will be accretive to AccorHotels’ EBIT in 2017 and will further strengthen its market leadership position in Australia by securing tenure on key assets. Completion of the acquisitions is subject to the usual conditions for this type of transaction, as well as regulatory approvals. 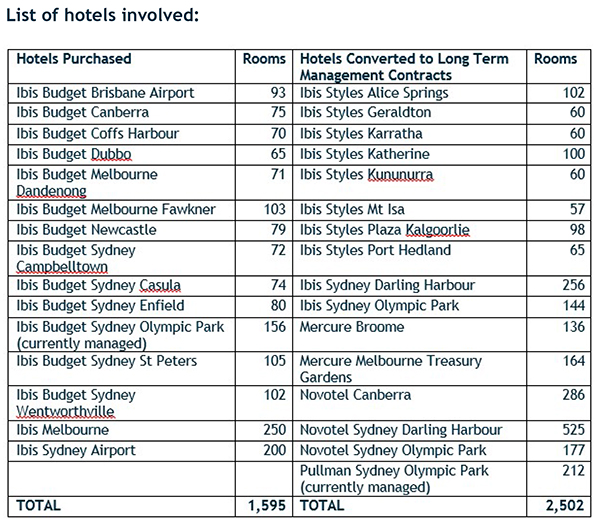